Equimundo, as a co-coordinator of MenCare: A Global Fatherhood Campaign, launched the third State of the World’s Fathers report on June 5 at the Women Deliver 2019 Conference in Vancouver, Canada. The event was co-hosted by Equimundo and Unilever, Dove Men+Care, in advance of Father’s Day in many countries around the world. Other international launches, in seven cities around the world, were held at conferences and parliaments in Sweden, the United Kingdom, the Netherlands, and more.

The State of the World’s Fathers 2019 report was featured in the media, from the New York Times and the Telegraph, to Forbes and Devex, with over 70 media mentions. The report’s social media campaign, #WorldsFathers, had a potential reach of nearly five million people. 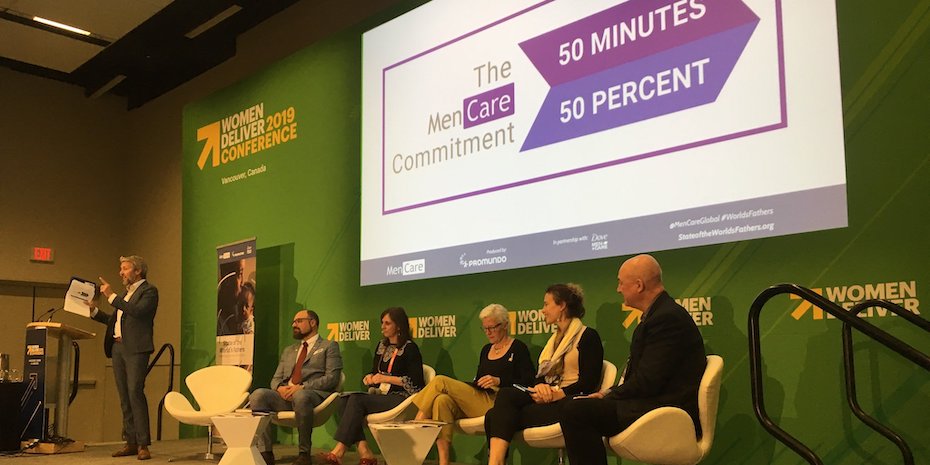 Christopher MacLennan, Assistant Deputy Minister for Global Issues and Development at Global Affairs Canada, delivered opening remarks for the State of the World’s Fathers 2019 report launch at the Women Deliver 2019 Conference. The conference is the world’s largest summit on gender equality and the heath, rights, and well-being of girls and women. “Being a father is the most important identity I have,” MacLennan said, calling attention to the importance of involved fatherhood and the need for paid parental leave. 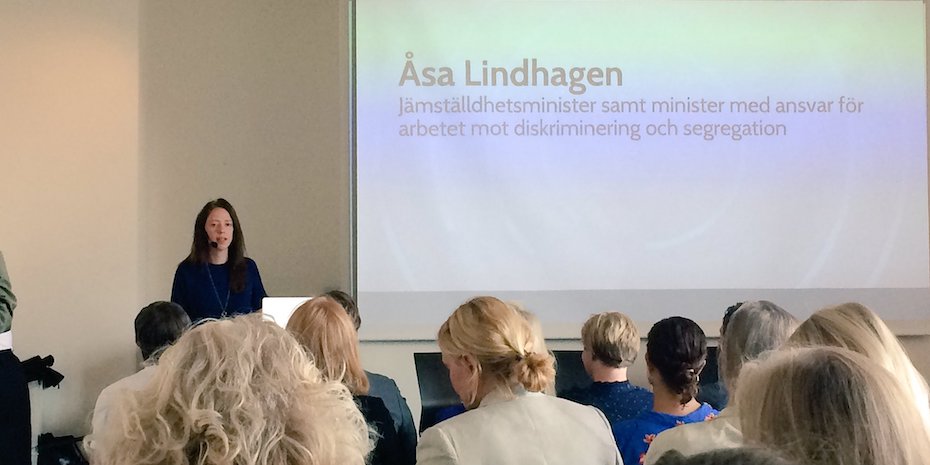 Swedish Minister of Gender Equality Åsa Lindhagen speaks at the Swedish launch of the State of the World’s Fathers 2019 report at the Swedish Institute.

The launch of the State of the World’s Fathers 2019 report at the Swedish Institute, organized by MÄN, Plan International, and Save the Children, took the shape of a panel discussion moderated by MÄN’s Catrin Söderberg, with the participation of Swedish Minister of Gender Equality Åsa Lindhagen.

The State of the World’s Fathers 2019 report was presented to the Nordic Council of Ministers by Equimundo President and CEO Gary Barker at a barbershop event focused on how men can contribute to improving gender balance in the workplace and to achieving shared caregiving at home. 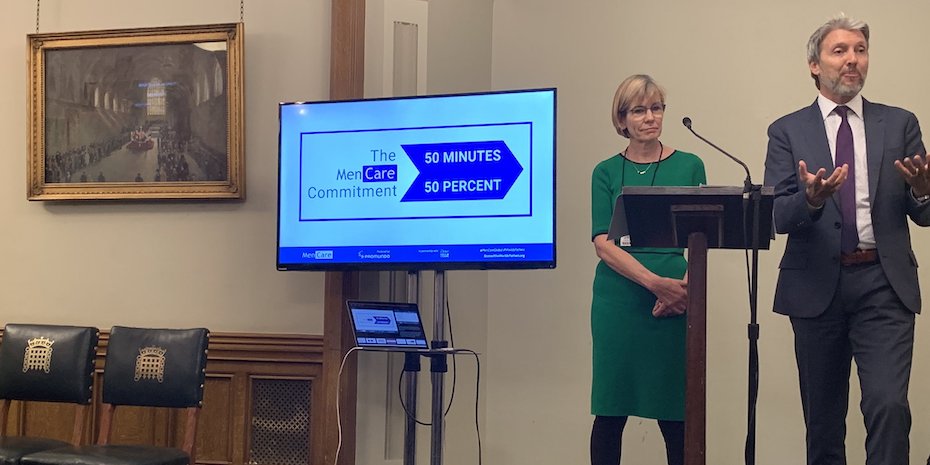 Report co-authors Gary Barker and Nikki van der Gaag presented the State of the World’s Fathers 2019 report in the UK Parliament alongside David Lammy MP, co-chair of the All Party Parliamentary Group on Fatherhood and Marvyn Harrison, founder of Dope Black Dads. The UK-specific data on men’s take up of paternity leave was highlighted, as well as concern around negative portrayals of fathers in the media.

The Hague, the Netherlands

Minister Koolmees from the Ministry of Social Affairs and Employment receives the report from Paulien van Haastrecht of Rutgers.

The launch of the State of Dutch Fathers in a father center at The Hague in the Netherlands featured Wouter Koolmees, Minister of Social Affairs and Employment, who spoke about how to navigate care work within relationships. The report revealed that information around parental leave arrangements is still needed, leading Dutch politicians to publicly speak out that they will try to increase pressure on Dutch companies to promote leave policies. The State of Dutch Fathers received national media attention from Hart van Nerderland, Radio1, and Volkskrant.

Equimundo’s Kate Doyle presented the State of the World’s Fathers 2019 report in Leiden, Netherlands at the International Step by Step Association’s pre-conference workshop on gender equity and father (and/or other male caregiver) involvement in early childhood. 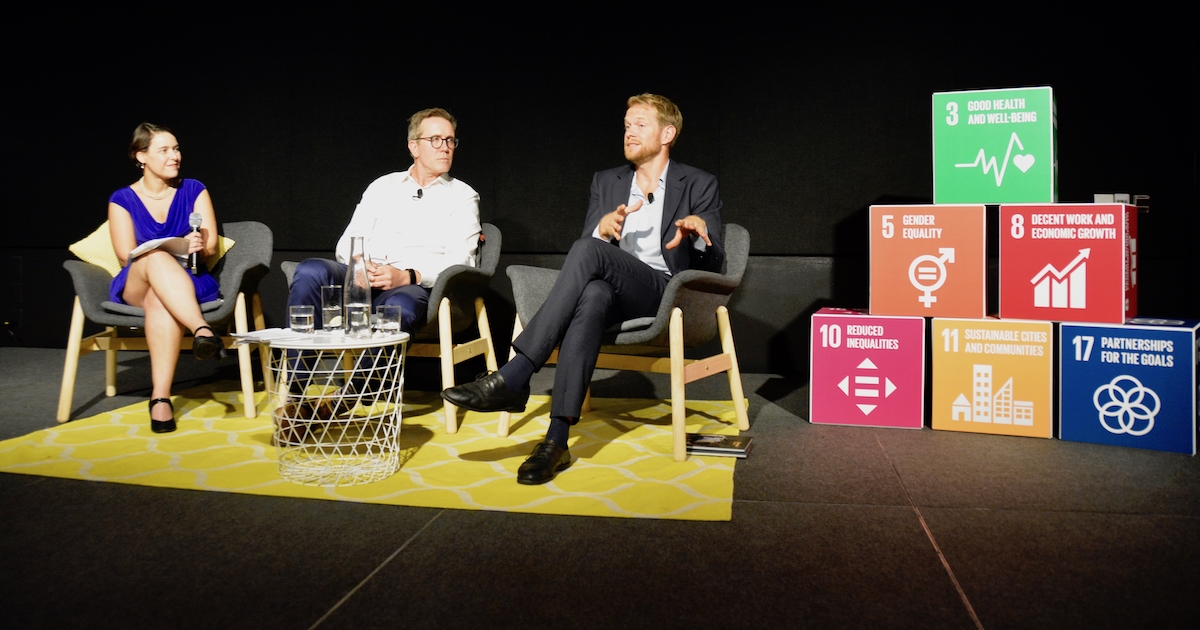 Equimundo partnered with the Embassy of Sweden to co-host a panel discussion on gender equality, parental leave, and men as caregivers, where Equimundo’s Dean Peacock presented findings from the State of the World’s Fathers 2019 report. The event was followed by an exclusive viewing of the critically acclaimed photo exhibition Swedish Dads by Swedish photographer Johan Bävman. The panel discussion was moderated by Vicki Shabo, a Senior Fellow at New America’s Better Life Lab.

Read more about the launches of State of the World’s Fathers in 2015 and 2017, and read the global report and its adaptations here.