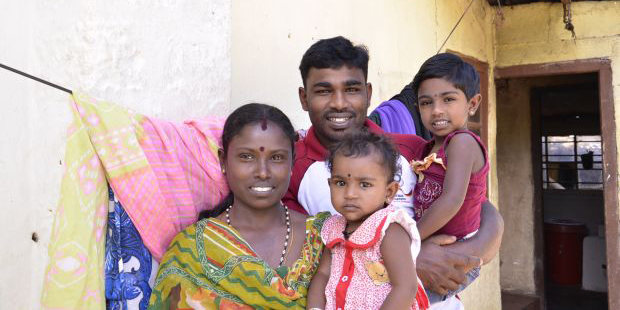 A growing and overwhelming body of evidence confirms that engaged fatherhood is good for children, good for women, and good for men themselves. But not many fathers know it.

In the majority of Sri Lankan families, cooking, feeding, washing, cleaning, and bringing up children is perceived as a woman’s responsibility, with the man having little involvement in the lives of his wife and children. The disengagement of men in the wellbeing of their families can often pave the way for isolation, domestic violence, and abuse.

“I used to think that bringing up my children and chores at home were my wife’s responsibility,” says Christopher, a 31-year-old man living in the central hills of Sri Lanka. “My wife would get up early in the morning, cook for the family, and get the children ready for preschool and daycare before she went to work, and I would sleep through all of it, wake up late, and go to work. After work I would go and play sports with my friends, and if I had some money, go for booze as well. None of us saw anything wrong with this lifestyle.”

Christopher’s wife Vijayakala didn’t see anything wrong with it either. She thought that it was “normal” and that she just had to bear it.

Christopher comes from a community of tea estate laborers in the Central Province of Sri Lanka, where intimate partner violence is the highest in the country, with a prevalence of 72%. In his community, women pluck tea from morning until evening in any kind of weather, while men work in the factory until only 2:00pm. The rest of the evening, most men get drunk, which contributes to domestic violence and abuse.

“I never listened to my wife’s opinion. So even over very small matters we argued a lot. I would even beat her sometimes. I was the boss,” Christopher says. “With my daughter, it was the same. She is four, and if she asked for toys I would spank her.”

When World Vision began to work among tea estate communities, domestic violence and child abuse were identified as some of the biggest problems to be addressed. Domestic violence is often normalized and trivialized in Sri Lankan culture, with both men and women believing it to be normal. An old Sri Lankan proverb states: “There are three things that can be beaten: a drum, a dog, and a woman.” Another proverb states: “Don’t let the outsiders know the fire inside your house.” Indeed, a survey conducted by in 2013 revealed that 58% of women in Sri Lanka agreed that “a woman should tolerate violence to keep the family together.”

Increasing awareness and empowering women alone, however, wasn’t enough to solve the problem. It was important that both men and women be brought together to work toward promoting gender equality and preventing violence at home.

World Vision, with the support of Promundo, introduced group educational sessions based on MenCare’s Program P, a methodology designed to promote men’s involvement as caregivers in the lives of their partners and children, in the tea estate communities. The program’s sessions cover a variety of topics, such as gender equality, family life, alcoholism, financial planning, and child protection and development. A special session on family enrichment improves interaction between husbands and wives, helpings them practice healthy communication, shared decision-making, and joint visioning for their families.

“The sessions changed my whole perspective on marriage and family,” says Christopher. “I started to share the chores at home – helping children get ready in the morning and doing laundry. I don’t argue anymore at home either. I have learned to have conversations with my wife and my children without yelling or beating. I can see that it has changed my daughter from being afraid of me to being more relaxed around me. I didn’t know being involved in their lives could be so rewarding.”

“Before the project I used to allocate money from my salary for booze because I thought it was my right. But now I have stopped drinking and smoking completely,” he says. “Surprisingly, it gives me more stamina to work. My wife and I plan our expenses for the month and we have been able to pay off all the debt, open savings accounts for the children, and even buy a gas stove.”

After work, Christopher now spends most evenings with his wife and children. “I help my daughter with her crafts or any other work she’s brought from preschool. Then I put on some music for her to dance. She loves to dance,” he says.

These changes are evident in every father who has taken part in the MenCare project. “They have developed the habit of building savings and are more involved in the lives of their children,” says A. Jeyaram, estate manager at Ouvahkellei Estate, where Christopher lives and works. “Domestic violence has started to disappear from their homes, alcoholism and smoking has been significantly reduced among the workers of our estate, and the productivity has increased by 25% compared to previous years.”

An evaluation conducted among fathers aged 25-40 who participated in the project indicated that 69% have reduced alcohol consumption, 66% support their partners in household activities and are engaged in the lives of their children, and 72% now prepare their monthly budget with their partner.

“But this change is not always easy,” says Christopher. “Some of my friends call me a sissy for helping my wife with household chores. They don’t understand why I don’t go drinking anymore.”

However, Christopher and others from the project have begun to share their knowledge with their community, becoming activists in preventing violence against women and children. Many have already begun to see changes among their friends and peers.

“I can see some of them changing, and I see the joy in their wives and children and even neighbors,” he says. “Every father should go through the MenCare project.”

MenCare – currently implemented in the Nuwara Eliya, Pathana, Lindula, and Devon areas in partnership with the Estate Management and the Ministry of Health – benefits 1,060 families.