In advance of Father’s Day, MenCare launched the State of the World’s Fathers: Time for Action report, produced by Promundo, at a series of events in June and July 2017. The report reveals what has stalled progress toward global gender equality and outlines a bold agenda forward for men and boys doing fully 50 percent of the world’s unpaid care work, in support of achieving Sustainable Development Goal (SDG) target 5.4 on unpaid care work, as part of the global gender equality agenda.

The launches, from Serbia to Switzerland and the United States, gathered over 200 high-level political and civil society speakers and advocates, raising awareness of key issues and building long-term partnerships and coalitions. The events fed into targeted advocacy at the 35th Session of the Human Rights Council, supporting resolutions on eliminating violence and discrimination against women and girls, which have subsequently been adopted.

State of the World’s Fathers: Time for Action has also been highlighted in the media, including in The Telegraph, Glamour, Devex, WNYC, and more. In addition, the report’s hashtag, #WorldsFathers, was used nearly 1,000 times, with a potential reach of around 1.1 million unique viewers.

The report provides an 11-point action plan for achieving equitable distribution in unpaid care work, including key advocacy recommendations around policies and practices, such as equal, paid, non-transferable leave for all parents. It calls for a global goal and national action plans – building on Agenda 2030 and the Sustainable Development Goals – to achieve men and boys taking on 50 percent of the world’s unpaid care.

See each of the key messages here: 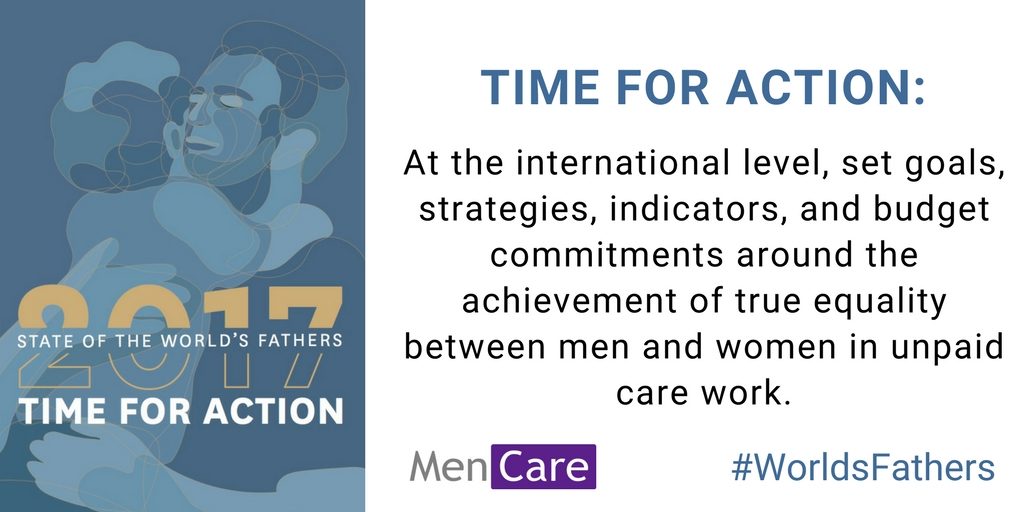 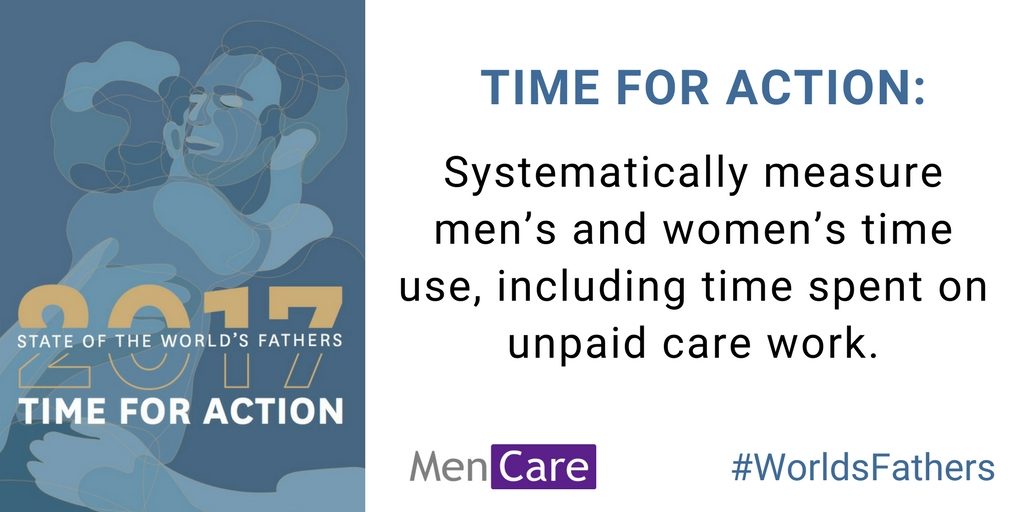 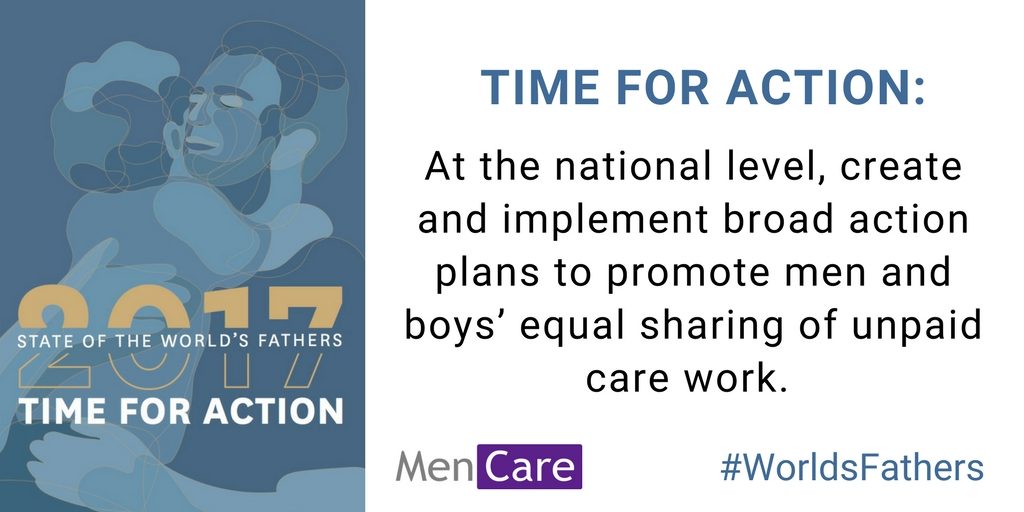 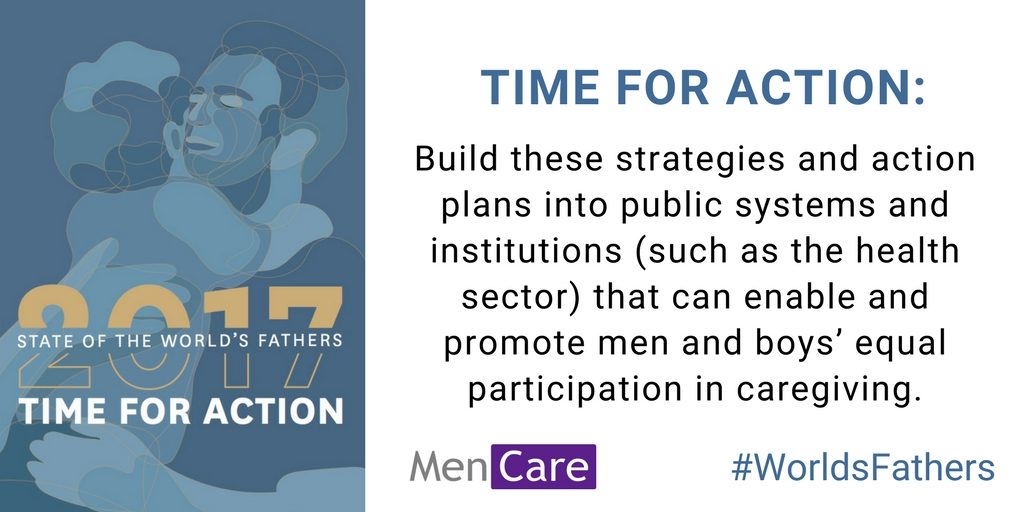 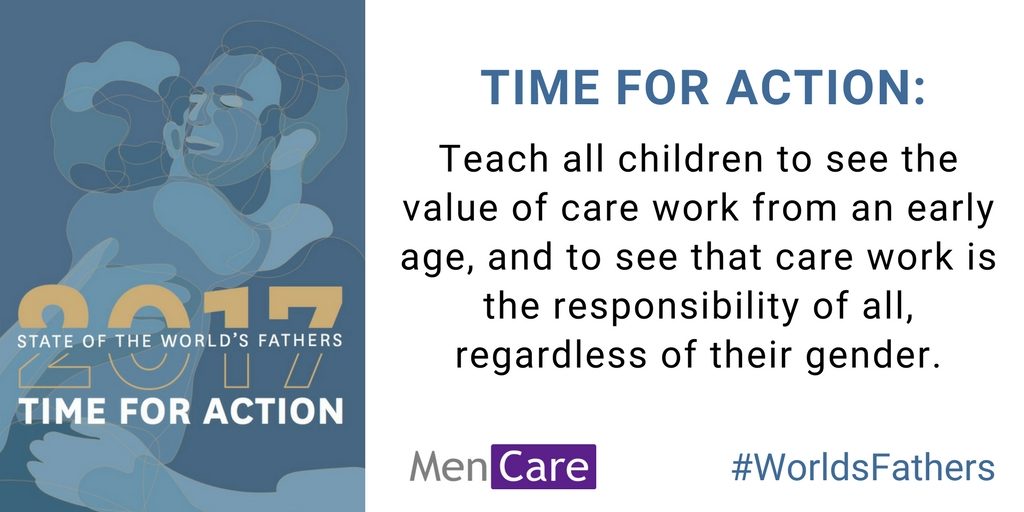 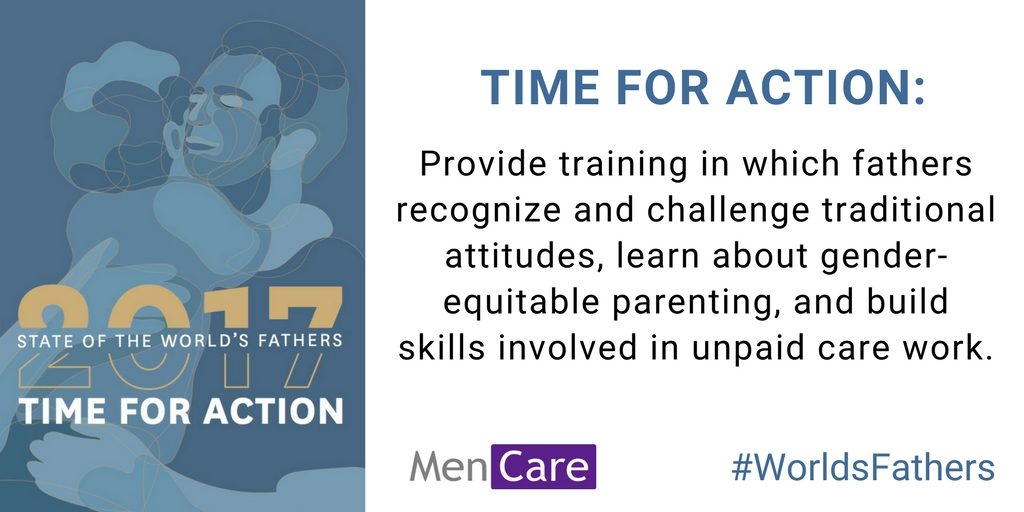 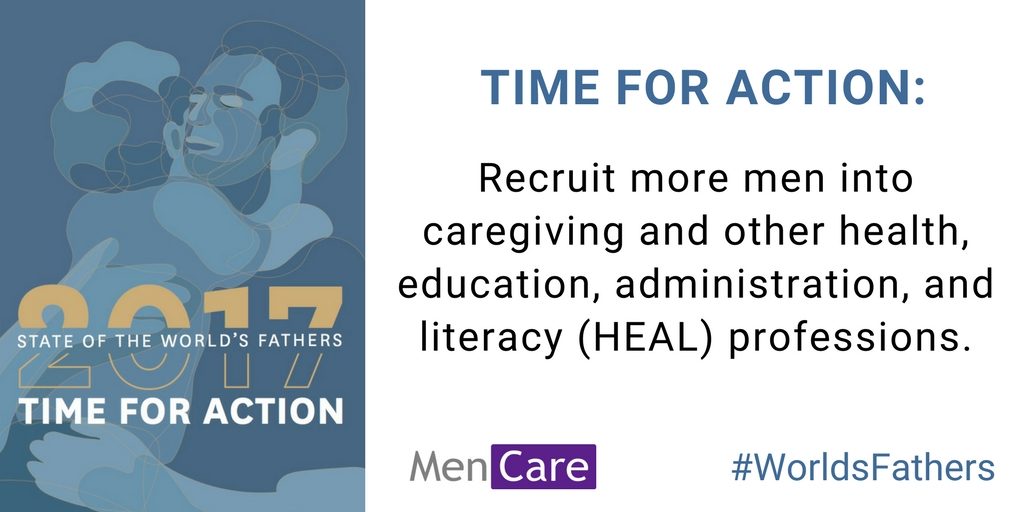 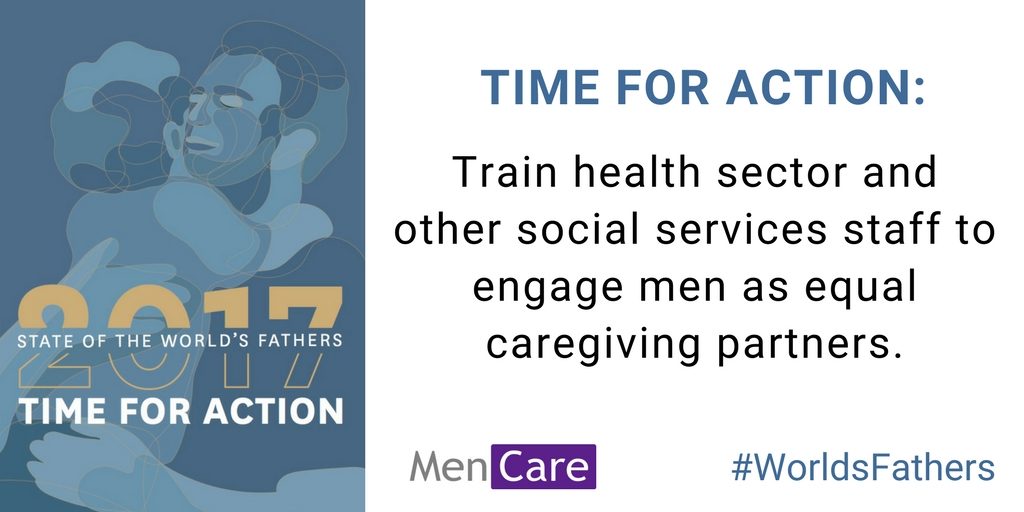 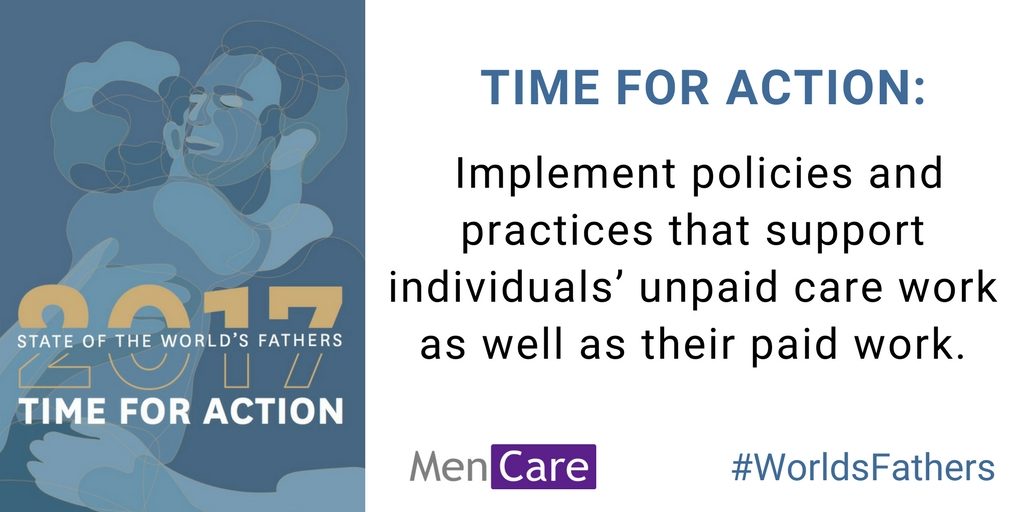 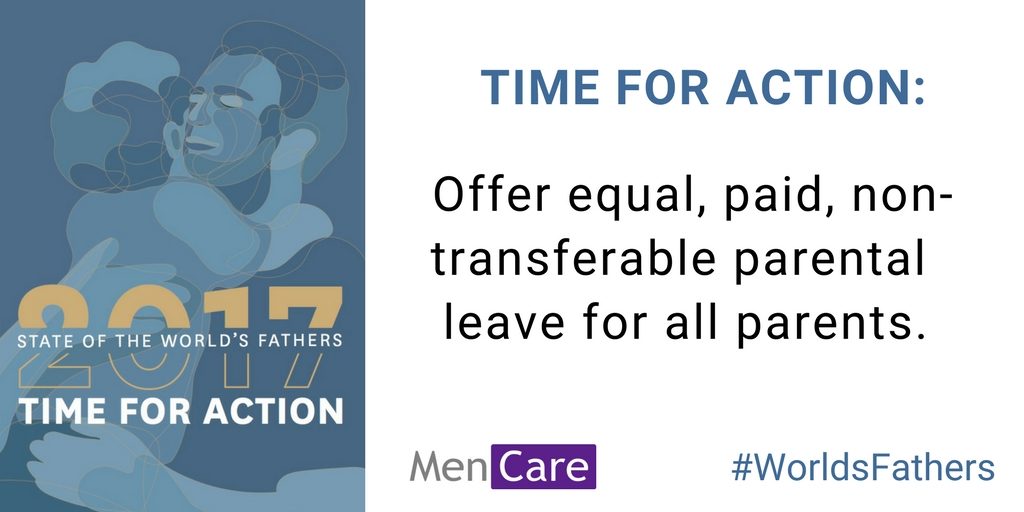 The 2017 State of the World’s Fathers: Time for Action report was unveiled at the MenCare Global Meeting 2017, hosted by Promundo, Centar E8, and MenCare Steering Committee members Sonke Gender Justice, Save the Children, and MenEngage Alliance in Belgrade, Serbia. The meeting brought together nearly 100 activists, academics, and practitioners from across 50 countries on June 8–10 to share and exchange new findings, lessons learned, and future directions in the field of engaging men as fathers and caregivers for gender equality.

Watch the recorded State of the World’s Fathers: Time for Action launch:

June 12 – State of the World’s Fathers: A Time For Action in Geneva, Switzerland

Promundo launched State of the World’s Fathers: Time for Action at the Graduate Institute in Geneva, Switzerland. The event was co-hosted by Women@TheTable, an organization that builds movements supporting women’s voices, seats, and influence at decision-making tables. The launch garnered nearly 1,500 Facebook livestream views during the event. Watch the video here.

June 13 – Barbershop Conference at the United Nations in Geneva, Switzerland

Promundo, with the Governments of Iceland, Canada, and Suriname on behalf of MenCare, and with experts from MenEngage Alliance, presented State of the World’s Fathers: Time for Action at a Barbershop Conference at the United Nations in Geneva, Switzerland during the 35th Session of the Human Rights Council. Some 200 individuals attended, including ambassadors and high-level United Nations representatives such as the Deputy High Commissioner for Human Rights, to discuss the crucial role that fathers can play in advancing gender equality.

A second Barbershop event presented State of the World’s Fathers: Time for Action in New York to UN Permanent Representatives and civil society experts on July 20, as a part of the ongoing Barbershop Conference series hosted by the Permanent Mission of Iceland to the UN. The event took place during the High Level Political Forum on sustainable development in 2017, convened under the auspices of the Economic and Social Council. The forum’s theme was “Eradicating poverty and promoting prosperity in a changing world”, and the set of goals it aimed to review in depth included Goal 5: Achieve gender equality and empower all women and girls.