“If we want to build a ship, we must know how to put it together. We also need to learn how to navigate it, but we also have to deal with our own fears, resistances, insecurities and sometimes our own overestimation before we are ready to start the journey.”

– A male counselor in Albania, on the process of learning and developing perpetrator counseling work 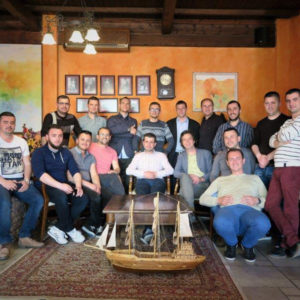 Historically in Albania, the focus of intervention groups to tackle domestic violence has been placed on the victims of violence. When it came to addressing the perpetrators, judicial sanctioning was the only way of detaining these individuals and safeguarding the abused women and children. In recent years, however, interventions to reduce and prevent domestic violence have seen a growing need to not only protect the victim but to also hold perpetrators accountable, and furthermore, to work with them to change their behavior. In line with international findings, setting up a counselling service for men who have used violence was seen as an important step in enhancing the effectiveness of interventions to reduce the incidence of domestic violence.

The first two centers in Albania aimed at men who have used violence were established in 2014, through the initiative of the organizations Woman to Woman in Shkoder and Counselling Centre for Women and Girls in Tirana, in close cooperation with the Ministry of Social Welfare and Youth, along with ongoing support and funding from IAMANEH, Switzerland. These two new services, namely the Counselling Office for Boys and Men (ZDB) in Shkodra and the Counselling Line for Men and Boys (CLMB) in Tirana, were established as separate structures with staff specialized in perpetrator counseling and in broader programming. They included both coordinated community and institutional approaches as well as direct counseling services for perpetrators.

The field of working with the perpetrators of domestic violence in Albania is still in the early stages of development. However, important steps have been taken to inform public institutions and the community of the need to work with perpetrators in addition to the existing support for those who have experienced violence. The initial collaboration with courts, police, probation, and education institutions has yielded a considerable number of referral cases of men and boys for treatment.

Recognizing the increasing need and demand for referrals of perpetrators from other cities in Albania, in April 2017, Woman to Woman and Counselling Centre for Women and Girls – in cooperation with the Ministry of Social Welfare and Youth and with the financial support of IAMANEH – initiated a two-year national training cycle.

The training, titled “The Second Training Cycle for Counsellors for Perpetrators,” aims to advance the professional skills and knowledge of those working with men who have used violence, based on international standards of perpetrator counselling. Participants in this training include psychologists and social workers from Albania and Kosovo.

The implementation of this training is entrusted to a specialized center in working with men who have used violence, AGREDIS, headquartered in Lucerne, Switzerland. The training is held by Mr. Roland Reisewitz, expert trainer in perpetrator counselling, in cooperation with two assistant trainers, Z.Endrit Uligaj, coordinator of the Counselling Office for Boys and Men (ZDB) in Shkoder and Z.Bledar Zeneli, coordinator of the Counselling Line for Boys and Men (CLMB) in Tirana.

The complete training cycle will consist of six modules, for 152 hours of training. Training provides a well-balanced program focused on group learning – including discussions, presentations of case studies, games, role-playing, and other group-based exercises. All modules include a practical focus, and participants are invited to share their own work and personal experiences. The training cycle will equip participants not only with the necessary qualifications to provide counselling services for those who have used violence, but also with a chance to apply the knowledge gained during the training through the development and implementation of new initiatives. Participants will have professional follow-up and some financial support to put into practice the knowledge and skills gained in the training cycle.