Today, June 9, MenCare launches the 2017 State of the World’s Fathers: Time for Action report, revealing what has stalled progress toward global gender equality and laying out a bold agenda forward for men and boys doing fully 50 percent of the world’s unpaid care work. 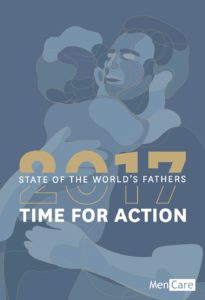 At the current rate of global progress, it will take an estimated 75 years for women and men to achieve equal pay for equal work. Reaching equal representation in government, business, and other spheres of power could take even longer.

The second-ever State of the World’s Fathers report draws from nearly 100 research studies and reports, with data from nearly every country where it is available. A publication by MenCare: A Global Fatherhood Campaign, it calls for a global goal and national action plans – building on Agenda 2030 and the Sustainable Development Goals (SDGs) – to achieve men and boys doing 50 percent of the unpaid care work.

Even where men are contributing more than they used to, globally the gaps between women’s and men’s contributions persist. Across 20 countries, men’s contribution to housework and childcare increased only an average of 6 hours per week over 40 years. These gaps, which are largest in low- and lower-middle-income countries, not only hold women back in their paid jobs and professional trajectories, but also limit broader social and economic development, as well as progress toward gender equality.

“Radical, transformational change in the division of unpaid care must be a global goal. Anything less is inequality. In a global political climate that is experiencing conservative backlash around sexual and reproductive rights and government support services, the time for action is now.”

The report affirms that many men do want to be more involved in the lives of their children. Even in countries where men’s involvement in care work is limited, such as those in the Middle East and North Africa, half or more of men surveyed said that they spent too little time with their children because of their job. In the United States, 46 percent of fathers said they were not spending enough time with their children, compared with 23 percent of mothers. For those men who are already taking on greater caregiving roles, State of the World’s Fathers reveals that it is often unexpected life circumstances – situations that present no alternative – that had driven their new household or professional roles.

A major impediment to progress, finds the report, are the gender norms that stereotype caregiving as “women’s work.” Across 59 countries, 45 percent of men and 35 percent of women, on average, agreed with the statement, “When jobs are scarce, men should have more rights to a job than women.” Economic and workplace realities, such as the gender wage gap and norms that discriminate against flexibility or taking leave, further drive an inequitable division of labor at home and at work. Finally, laws and policies around equal pay, taxation, and public provision of childcare, parental leave, and social protection often reinforce the unequal distribution of care.

“Women’s unpaid care is currently subsidizing labor markets across the world. Now is the time to reduce the debt that men, the private sector and states owe to women. Besides this question of equality, it also makes good sense in terms of long-term resource use. An increased investment in early childhood focused care and development, along with an equal, non-transferable parental leave framework reduces long term social welfare spending.”

The report highlights specific recommendations for action, including its foremost policy recommendation for paid leave, equally shared between mothers and fathers (or between other co-caregiver arrangements). State of the World’s Fathers also highlights access to income support – including poverty alleviation and affordable, high-quality childcare – and universally available father-centered parent training as spaces for progress.

State of the World’s Fathers: Time for Action comes two years after the inaugural State of the World’s Fathers 2015, a landmark analysis of fatherhood launched in June 2015 at the United Nations Headquarters in New York, United States and subsequently in 10 cities globally, inspiring advocacy and action with MenCare partners in over 40 countries .

To watch the livestream of the launch, visit www.men-care.org/livestream on June 9 at 9:00am CEST.