“Every step I take or anything I do, directly or indirectly, is connected to my child.”

This phrase is one of many from the “Father’s Diary” blog, which over the past two months has gained online popularity in the country of Georgia. As part of the MenCare campaign, UNFPA Georgia and its partner organization We Care launched the blog to share fathers’ diary entries and letters to their children, shining a spotlight on the importance of equitable, involved fatherhood.

In the framework of the United Nations Joint Programme for Gender Equality, supported by the Government of Sweden, UNFPA Georgia launched a national MenCare campaign in July 2016. Representatives from the Government of Georgia, international and non-governmental organizations, sports and arts communities, and campaign supporters and participants attended the official launch of the campaign. Fathers, who came to the event together with their children, voiced their readiness contribute to achieving social change and gender equality.

The launch of the MenCare campaign in Georgia was preceded by work that UNFPA Georgia and its partner organizations have been doing for many years. The survey Men and Gender Relations in Georgia, conducted by UNFPA in 2013, finds that roles and relationships in Georgia are not equal for men and women. The research shows that inequitable stereotypes about women’s and men’s roles in society are still widespread, and such notions hinder men from taking full responsibility for being equitable fathers, husbands, partners, and family members. For example:

Based on these research findings in Georgia, UNFPA and its partner organizations have actively worked to raise awareness and generate public discourse about gender norms and inequality since 2013. Campaigns and activities to promote men’s engagement as fathers and caregivers – such as “Daddy, Read Me A Book,” the Fathers television program, and “A Letter to a Child” –have captured public attention and raised awareness about the importance of gender-equal caregiving. With the support of UNFPA, Father’s Day was celebrated in Georgia for the first time on June 19, 2016.

As part of the MenCare campaign, CulinART magazine recently published a series of photos and stories about gender equality from famous Georgian fathers. In a special edition of CulinART, four Georgian men – writer and diplomat Gela Charkviani, basketball player Anatoli Boisa, TV presenter and screenwriter Alexandre Lortkipanidze, and actor Kakha Kintsurashvili – shared stories about family relationships, fatherhood, and caregiving. Their stories, featured below, encouraged readers to become nonviolent fathers, partners, and caregivers and to get more involved in housework and childcare. 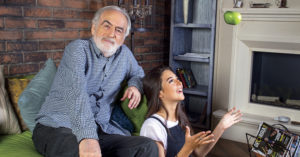 The only thing men are unable to do [in terms of caregiving] is to bear and breastfeed a baby, since that requires pure physiological characteristics that differ between women and men. As I have written about in my book, European women are more attracted to men who support them in housework. Gender roles have transformed: hunting is not a man’s job anymore, just as women now perform tasks that were not been historically assigned to them. Therefore, men should now share household chores equally. I also share this in my book: “If you want to impress European women, stop caring about your muscles and go wash the dishes.” 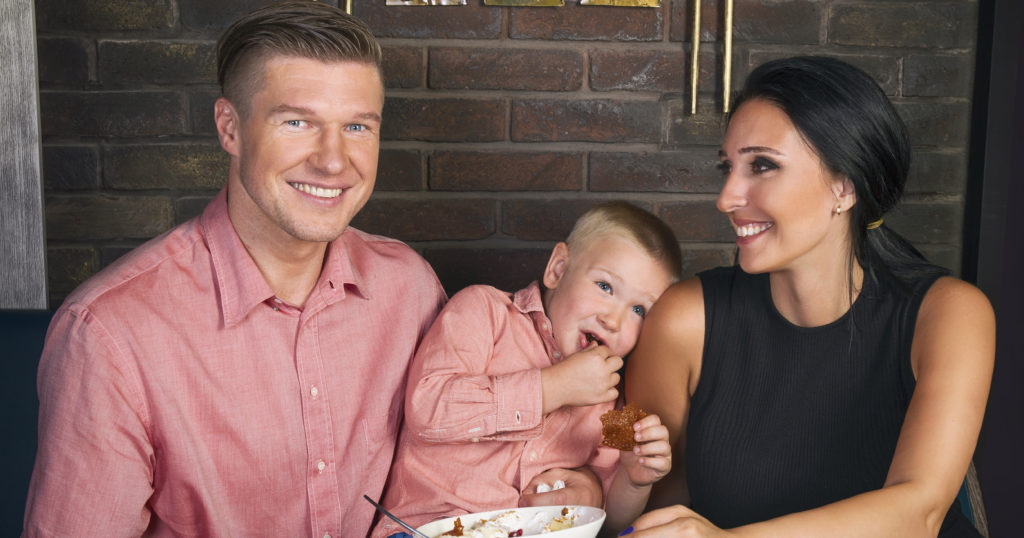 I’m very good at cooking. I can’t say I’ve been enchanted by it since childhood, but I got used to it while living independently, and now I even like the process. I also like to care for and feed our child. I love being with him. If I’m not playing or exercising, I spend all my free time with him; I take him everywhere I go. I was 26 when he was born, and since then I’ve been involved in everything related to him. I attended his birth; I wanted to have a child very much. Now he is turning 4 years old. … I don’t find it hard to feed him, put him to bed, or entertain him. 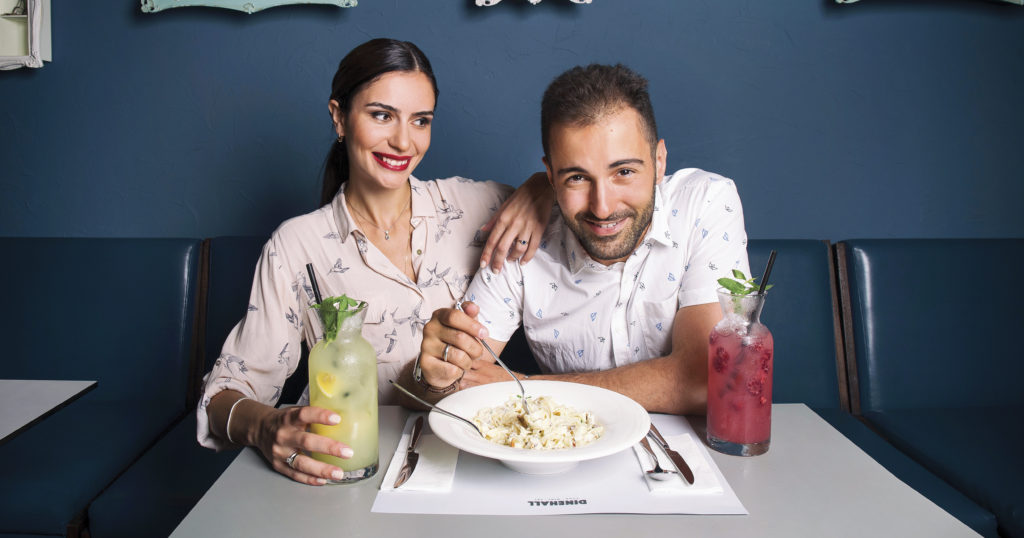 It’s probably a little bit ambitious of me, but I believe I’m a very compassionate person. I don’t only care for my friends and relatives, but I also love people in general and do my best in supporting them. In my understanding, caring for someone is trying to help them ease their burden and improve their life.

My wife and I are very busy, and we don’t have a lot of time together. Whoever has free time is the one who does the housework, including cleaning, going grocery shopping, etc. There is nothing shameful in this. I don’t see a problem in doing any kind of household chores. The only thing I don’t know how to do is ironing, but I’m very good at everything else. I’m not saying that household chores are my hobbies or passions, but since they are an inevitable part of life, I try to find fun elements in the process instead of seeing it as a boring routine. 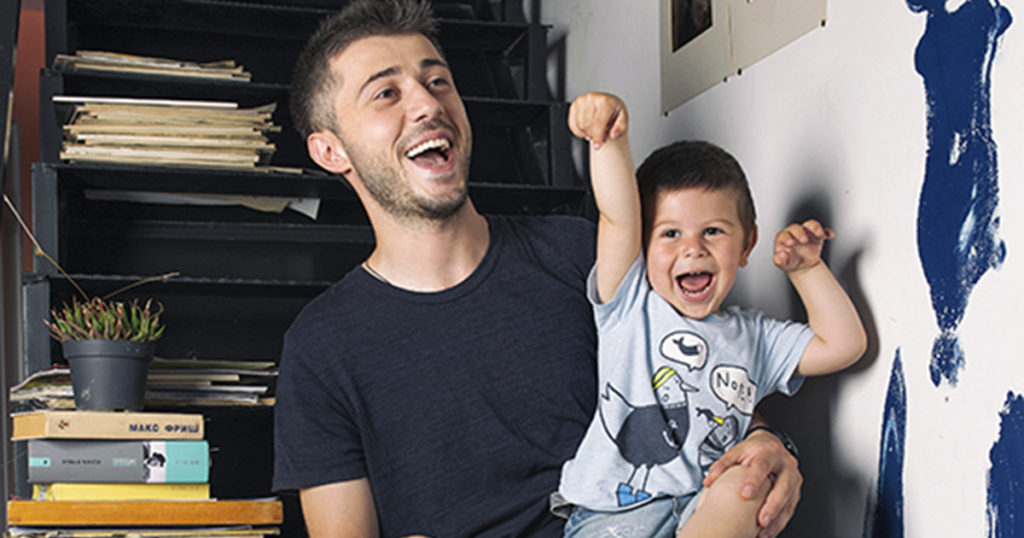 When you love someone and commit to a relationship, you are taking on a big responsibility. This feeling of responsibility is followed by the sense of caring for this special someone. Relationships cannot work without caring.

We don’t distribute roles depending on who is the breadwinner and who is not; this simply does not exist in our family. We have the same approach with other routine matters as well. There is nothing shameful in doing housework. I think people have assigned different roles to specific genders, but cleaning the house and doing the dishes are not gender-specific activities. Everyone can do it, and in our family, whoever has free time does it.

I’ve been with my son from the very moment he was born; ever since then I have the strong feeling that part of me was born [when he was born]. There is nothing problematic in the process of taking care of him. … What’s very important is that we are friends, and I want it to always continue this way.

In Georgia, the MenCare campaign aims to unite men for whom gender equality means equal distribution of duties and responsibilities, benefits and opportunities; men who are ready to become positive role models for others through shared caregiving and gender-equitable attitudes and actions; and men for whom being a caring father and partner means both great happiness and great responsibility.

With the help of photo projects, blogs, videos, stories, public discussions, and additional campaigns and outreach, UNFPA and We Care continue to work toward increasing the number of men in Georgia who support these principles.