In advance of Father’s Day, Promundo launched the first-ever State of America’s Fathers report as a MenCare publication. From New York to Los Angeles and Washington D.C., the country’s leading influencers, policymakers, and game-changers took an honest look at what it means to be a dad in the United States today, how it’s different than ever before, and the future of this fatherhood revolution.

The State of America’s Fathers report contains never-before-seen data analysis from the Families and Work Institute as well as practical policy recommendations to engage U.S. fathers equally in childcare and domestic work.

“It boils down to three big, overarching messages here,” said Gary Barker, President and CEO of Promundo-US at the State of America’s Fathers Summit on June 14: “One is about time, and who does what at home. It’s also about inequality. And third, it’s about support – fathers not being able to do it alone.”

The New York Summit garnered over 40,000 views on Facebook Live, engaging a wide audience.The report has been viewed over 3,000 times online and the report’s hashtag received more than 28 million impressions on Twitter. Many notable figures endorsed the report, from Anne-Marie Slaughter of New America to Jessica Seinfeld of the GOOD+ Foundation and Cecile Richards of Planned Parenthood.

Chelsea Clinton of the Clinton Foundation noted, “I am tremendously grateful to Promundo for continuing the work started through their 2011 Clinton Global Initiative commitment to engage men as fathers and caregivers and to promote research, practices, and policies that are in the best interest of our families and gender equity.”

The full multi-issue report is available for download here. With over 80 mentions in media outlets, read about it in TIME, CNN, The New Yorker, and Fast Company, and see what Melinda Gates has to say about it. Join the conversation online using #AmericasDads.

Key findings from the report include:

Time: While men’s time spent on childcare has increased over time, women are still taking on most of the childcare and housework. The majority of parents say they want to spend more time with their children.

Inequality: There is a tale of two fatherhoods in the United States. High-income dads are championed and getting headlines for playing active roles in their children’s lives, while low-income dads – many nonresident – are often either valued or stigmatized primarily by their ability to make financial contributions.

Support: America is in urgent need of policies and support so that all fathers can realize their roles as fully engaged, fully equal caregivers.

The revolution in the way we see and support fathers (which is already underway) has the power to advance gender equality, improve childhood development outcomes, and raise the U.S. gross domestic product (GDP) by several hundred billion dollars. Supportive policies must be implemented to realize this change. These include national legislation to provide for paid, equal, and non-transferable leave for mothers and fathers, as well as policies which provide the poorest fathers and families with a living wage, aim to reform the justice system, and provide additional services that encourage and support men’s caregiving. 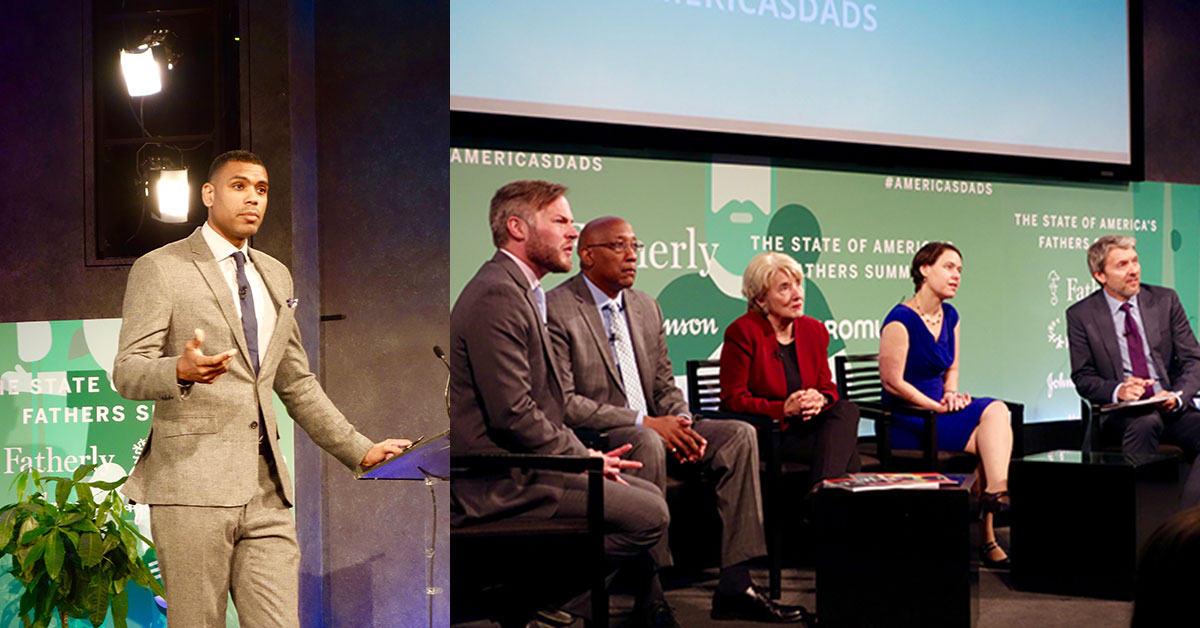 Allan Houston, former NBA player and Assistant General Manager of the New York Knicks, posed the question, “What – as influencers – what can we do?” His response: “All I want to do is just be a good example as a father…” He added, “Other than being a husband, there’s no greater work or greater, more important role that I think I can have as a man.”

The report’s lead author, Brian Heilman; Joe Jones of the Center for Urban Families; Esta Soler of Futures Without Violence; Vicki Shabo of the National Partnership for Women & Families; and Gary Barker of Promundo-US presented key findings from the report on topics ranging from men’s involvement in caregiving to work-life balance and nonresident fatherhood.

J. Ivy, spoken word poet, and Coss Marte of ConBody added words of inspiration on the role of fatherhood in their own lives. Johnson & Johnson’s Manoj Raghunandanan spoke about importance of companies like his providing paid parental leave for mothers and fathers, and Ellen Galinsky of Families and Work Institute highlighted the report’s newly analyzed data.

To watch the Summit event, check out the Facebook Live recap, Part 1 and Part 2. Read more about the Summit on Fatherly and Johnson & Johnson.

The State of America’s Fathers Congressional Briefing, sponsored by Senator Chris Murphy of Connecticut, was hosted by Promundo and the National Partnership for Women & Families on June 16.

Gary Barker of Promundo-US (right) presented an overview of the report, emphasizing the need for “national, mandated policies that support families.” Vicki Shabo of the National Partnership for Women & Families (left) discussed the benefits of paid parental leave and advocated for a national policy, noting, “The U.S. is the only developed country that doesn’t provide paid parental leave.”

Ron Mincy (center) of the Center for Research on Fathers, Children and Family Well-Being at Columbia University raised the particular issues that low-income and nonresident fathers face in the United States, calling into question what commitments and contributions we as a society value: “When low-income men fail to make child support payments, it compromises their ability to see their child.” Read the full report, including each of its policy recommendations.

The Summit, which was themed, “Changing the Lives of Multiple Generations,” aimed to inform priorities and decision-making that can improve positive outcomes for society’s most at-risk children, their fathers, and their families.

A panel of experts introduced State of America’s Fathers on June 23 during the 2016 Work and Family Researchers Network Conference, which focused on the topic of “Careers, Care, and Life-Course ‘Fit:’ Implications for Health, Equality, and Policy.“

WFRN’s president, Phyllis Moen, noted about the conference (attended by people from 47 different countries, presenting in about 130 sessions), “My aim has been to focus on dynamics and contexts, including the contexts of different family and work stages and ages, as well as the contexts defined by organizational and public policy constraints and possibilities.”

At the symposium event, Ruti Levtov of Promundo-US provided background on MenCare and State of the World’s Fathers, in addition to presenting key data from State of America’s Fathers. Tyler Wigton of Families and Work Institute expanded on the report’s preliminary, never-before-published data analyses of the 2016 National Study of the Changing Workforce, which provided the report with evidence of shifting trends in American workers’ hopes for work-life balance as well as in their attitudes on gender roles and family values. Finally, Vicki Shabo of National Partnership for Women & Families discussed U.S. laws and policies – particularly parental leave – which lag behind when compared to other developed countries, and highlighted a gender transformative advocacy platform.