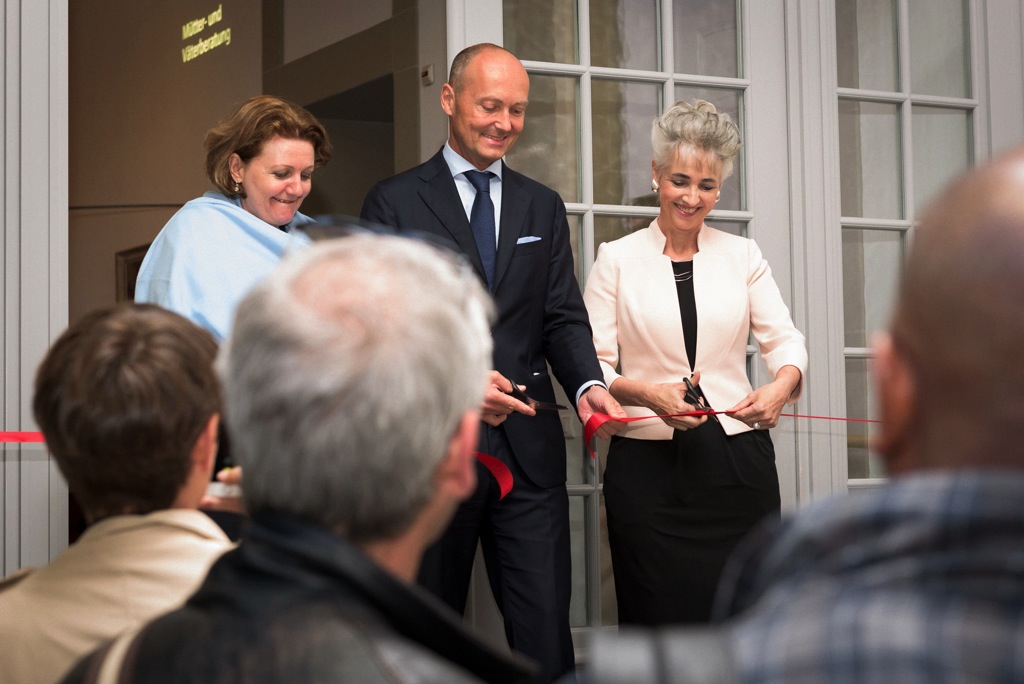 The ribbon-cutting ceremony at the MenCare Switzerland launch event.

The MenCare campaign officially launched in Switzerland on May 30. männer.ch/masculinities.ch – the umbrella organization of men’s and father’s groups advocating for gender equality in Switzerland – and the newly founded Swiss Institute for Men and Gender Issues (SIMG) are coordinating the effort.

Swiss women were not allowed to vote in national elections until 1971 – evidence of only a fairly recent national movement towards gender equality. It should not come as a surprise, then, that Switzerland has also been slow to bring its attention to the role of men in care work. No country in Europe has such an unequal distribution of paid and unpaid work between men and women as Switzerland does. And, only Albania and Ireland join Switzerland on the list of European countries that refuse to grant men any kind of parental leave – thereby continuing to reinforce childcare as “women’s work.”

Swiss people work about 16 billion hours per year – and more than half of these hours are not compensated. On average, Swiss women spend 20.5 hours per week taking care of children, while the average for fathers is 13 hours. For men, this reality is beginning to change, but in a disconcerting way. The amount of time Swiss dads spend taking care of children and the household has only risen by about 2.5 hours per week over the last 10 years. However, the hours they spend on paid work have largely remained the same: for every 100 fathers of young children, 89 still work full-time. At the same time, 90 out of every 100 men would like to reduce their work hours and are willing to accept pay cuts in order to do so.

MenCare Switzerland: A national effort to change hearts and minds

In advance of Switzerland’s 10th Father’s Day, and following two years of preparatory work, MenCare Switzerland publicly launched on May 30, 2016. männer.ch/masculinities.ch – the umbrella organization of men’s and father’s groups advocating for gender equality in Switzerland – and the newly founded Swiss Institute for Men and Gender Issues (SIMG) are coordinating the effort. To celebrate this step, the MenCare Switzerland team invited representatives from männer.ch/masculinities.ch, VIPs, and members of the public to join the launch celebration at the cultural institution Generationenhaus, in the capital city of Bern. 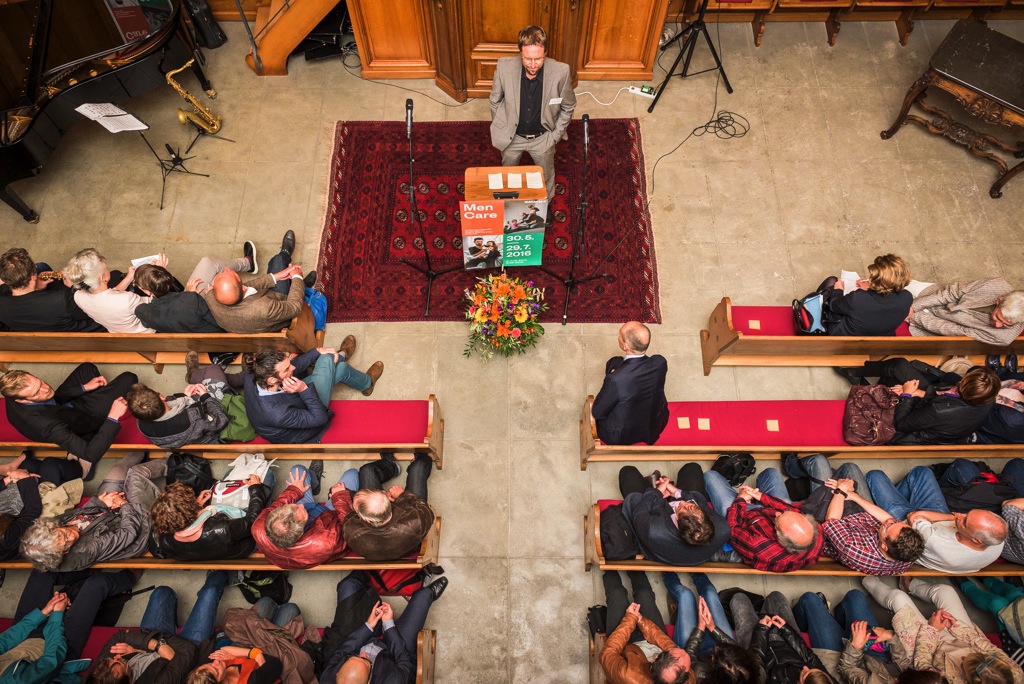 MenCare Switzerland is predicated on the belief that distributing benefits and burdens equitably among genders means splitting responsibility for paid and unpaid work equally. This means that women need a greater role in paid employment, and men need to perform more care work. To get there, MenCare Switzerland will push forward a debate about social values and a subsequent transformation of these values.

MenCare Switzerland partners stress that the initiative is more than a campaign; it is a national program with various components. While messaging and media work are crucial, MenCare Switzerland also has 22 active projects currently in implementation or development. These projects are divided into five program components: (1) Fundamentals (i.e. research and best practices for the research-to-practice pipeline); (2) Public Affairs; (3) Politics; (4) Institutions and Businesses; and (5) Intimate Social Environments. Across all projects, MenCare Switzerland is taking a collaborative approach: project design is done together with crucial change agents from each field.

In Switzerland, linguistic borders between the various cantons can limit the effectiveness of programs and campaigns. MenCare Switzerland’s national program, however, aims to truly have a national scope: it targets German-, French-, and Italian-speaking audiences in order to create lasting attitudinal change regarding fathers’ involvement and men’s caregiving contributions.

Financial support for MenCare Switzerland comes from four large foundations – including the Oak Foundation – as well as federal and cantonal sources. With an intended runtime of 12 years, the program seeks to communicate that changing attitudes about caregiving among the population at large will not happen overnight; this kind of change takes time.

To promote the launch of MenCare Switzerland, männer.ch/masculinities.ch commissioned a photo series by Swedish photographer Johan Bävman. Photos of fathers with their children often tend to have the all-smiles-and-happiness look of stock photos. Therefore, Bävman asked: How can men’s care contributions be portrayed in a real-life manner? The photographer made international headlines when he presented his series Swedish Dads last year. Using a documentary approach, Bävman shows the experience of men in an unadorned manner as they venture into the territory of childcare. männer.ch/masculinities.ch invited Bävman to produce the series Swiss Dads to document men’s lives in Switzerland in the same way. 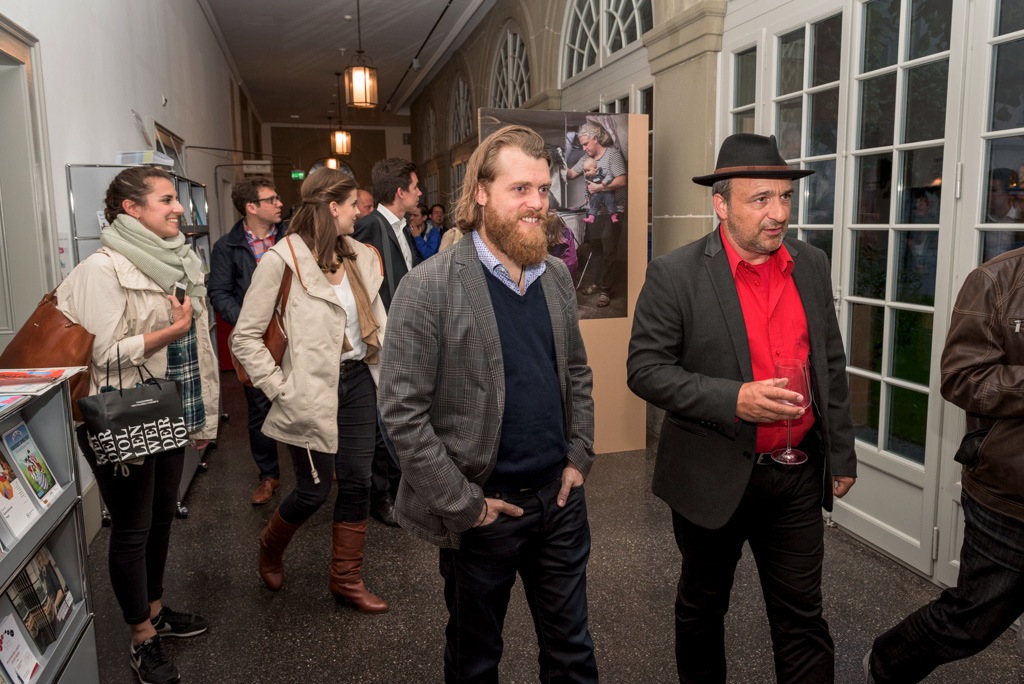 Visitors at the vernissage of the Swiss Dads photo exhibition by Johan Bävman.

The vernissage of the Swiss Dads exhibition coincided with MenCare Switzerland’s launch event. The photos are on display from May 30, 2016 until July 29, 2016 in the Generationenhaus in Bern.

männer.ch/masculinities.ch has also created a web platform for MenCare Switzerland. The website mencare.swiss caters to a broad audience, offering information about the kinds of topics men care about. Every week, the website’s news portal is updated with articles examining topics relevant to the work of MenCare – in a straightforward and practical manner.

Detailed information about the various projects contained in MenCare Switzerland’s national program is available in German, English, French, and Italian. The news portal has been featuring German-language content since the public launch. French-speaking contributions will be added beginning in fall 2016.

männer.ch/masculinities.ch has also published the first edition of its “Swiss MenCare Report” series. Volume 1, entitled “Fatherland Switzerland,” discusses the current situation fathers face in Switzerland. A short summary of the report is available in English, German, French, and Italian.

For more information about MenCare Switzerland: