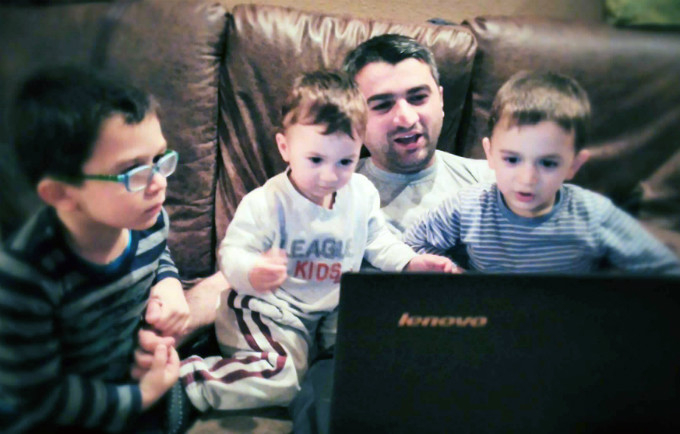 Zviad Kvaratskhelia spends an evening watching cartoons with his three sons. © “We Care”

TBILISI, Georgia – The camera zooms in, panning across a marble mantle covered with family photos of three young boys and their happy, smiling parents, then stops on what studies have shown is a statistically uncommon sight in Georgia: A father – in this case Zviad Kvaratskhelia, best-selling author and publisher – sitting in his living room, spending the day alone with his kids – Nikoloz, age 5, Demetre, 3, and Alexandre, 1.

The scene is from Georgia’s hit new reality TV show, Fathers, which was supported by UNFPA and aired for 10 episodes last fall. Each episode featured a well-known Georgian man going through a day’s routine with his children – getting them dressed, making them food, playing with them, etc. – without the help of his wife.

“I had never spent time alone with my kids before. They found it bizarre at first to see me changing diapers and cooking for them,” says Zviad. “But we mustn’t take our families for granted. We must always remember that fathers are irreplaceable and no one else can be a stand-in father on our behalf.”

Fathers was designed in response to a 2013 study on gender relations that found that 82 per cent of Georgian fathers don’t read to or cook for their children or engage in their education when they are under age 6, and 93 per cent don’t as they grow into later childhood and adolescence. 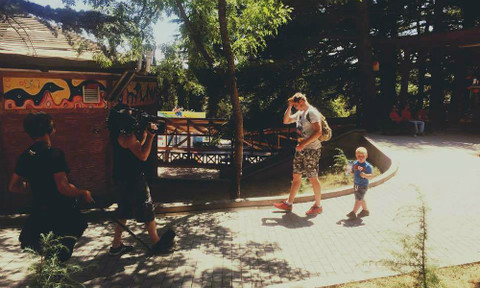 The Fathers crew visits a park with one of the show’s featured fathers and his son. © Retrica

The show aimed to challenge those long-established gender roles within families and reframe the concept of what fatherhood means to most Georgians.

“I have a sense of gratitude towards the show for enabling Zviad to discover his abilities as a caring father,” says Maya Kurdava, his wife. “And for serving as an example to him and other dads that men can equally take care of children – and that it is so fulfilling and rewarding.”

Georgian culture remains highly patriarchal, both inside and outside the home. And the 2013 gender relations study also reported that only 3.7 per cent of Georgians, both male and female, fully disagreed with the statements, “men have the last say in the family” and “women should endure verbal abuse to maintain the integrity of the family.”

Too often, this endorsement of men’s dominance and women’s silent suffering extends to physical and sexual gender-based violence as well. Nearly one-quarter of women surveyed in 2013 reported having had sex with their husband against their will, and according to an earlier UNFPA study, only 2 per cent of women who suffer domestic violence in the country reach out to police, lawyers and other service providers.

“The [TV] program emphasized the importance of paternal involvement in childcare and projected them as vital contributors to child upbringing and development,” said Lela Bakradze, assistant representative for UNFPA Georgia, adding that this change in gender roles is key to empowering women in numerous areas. “Through redistribution of family responsibilities and, therefore, allowing women more time and opportunity to realize their potential outside the family setting, men were represented as supporters of women’s social and economic empowerment.”

Tuning in to redefine gender norms 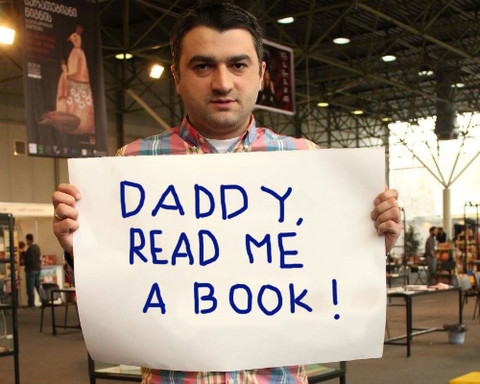 Fathers was one of the most-watched shows in the country during its time slot, and it is just the latest installment in an ongoing UNFPA campaign to increase fathers’ involvement in family life in Georgia.

Shortly after the 2013 study came out, UNFPA worked with the UN Joint Programme for Gender Equality to launch the social media campaign “Daddy, Read Me a Book,” which has garnered nearly 31,000 likes on Facebook. It also supported the blog “Letters from Dad,” featuring letters from fathers to their children. Currently, UNFPA is working with civil society partners to open a Georgian chapter of MenCare – A Global Fatherhood Campaign.

And for some Georgians the campaign has already succeeded in moving the needle towards greater equality in the home.

“After watching [his second episode of] the show, the very same evening, my husband helped our daughters with their homework, and afterwards he dried my youngest daughter’s hair with a hair dryer, while asking me to take a picture of it,” says Natia Nakasshidze, who was a dedicated viewer of Fathers. “The show made him realize that mere financial assistance is not enough, and that one of the most important things in life is taking care of children and spending time and communicating with them.”