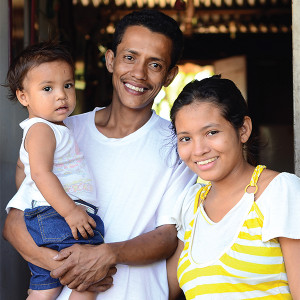 Fatherhood doesn’t seem particularly controversial – in fact it seems nearly universal (with about 80 per cent of men becoming fathers in their lifetimes). Becoming a dad can be one of the most life-changing moments for a man, a moment that the MenCare campaign and its partners believe can be used to establish lifelong patterns of involvement and care between fathers and their children.

Here’s the point of contention: the MenCare campaign sees fatherhood as a moment not only to recognize this shift in a man’s life, but also as one with the potential to redefine what it means to be a man altogether.

MenCare’s partners – in over 35 countries, including 9 in Latin America – are conducting programming that encourages men and their partners to discuss family planning and to share the childcare and domestic work. These organisations – some of which have been working with men as fathers for years – are running campaigns that feature images of men who are unabashedly affectionate, who are at their wives’ sides in the birthing rooms, and who spend quality time with their children. They’re working in hospitals, schools, and more to embed messages about involved fatherhood at an institutional level.

Depending on context, efforts to encourage men to be involved, nonviolent fathers who share caregiving responsibilities can receive warmer or cooler receptions. These mixed reactions lead to the question: how have efforts to involve fathers played out in Latin American countries, which have been historically associated with stereotypes of “machismo” and entrenched patriarchy?

Around the world, harmful gender norms, which socialise men to perpetrate violence and encourage and exacerbate power differences between men and women, promote and sustain inequalities. As a result of these norms, nearly 3 out of 10 women across Brazil, Mexico, and Chile report having experienced physical violence by a male partner. In addition to violence, inequalities are seen in the unequal distribution of care work. Even though about half of Latin American women (53 per cent in 2010) are participating in the paid labour force, men’s participation in unpaid care work has not kept up. Women take on a much higher share of caregiving in Latin America (spending between 6 and 23 more hours a week than men on paid and unpaid care work combined), than in the 24 Organisation for Economic Co-operation and Development (OECD) countries (in which women spend on average 2.6 hours more per week on paid and unpaid work combined than men do).

MenCare is a campaign set up to rectify these inequalities. It has fared surprisingly well according to preliminary evaluations across six Latin American countries (Brazil, Chile, Guatemala, Mexico, Nicaragua, and Uruguay). After being involved in MenCare programming, fathers are more supportive of gender equality, and they are more open to redefining manhood and fatherhood. MenCare partners have also increased the health sector’s receptiveness to engaging fathers; they have run successful national-level advocacy initiatives around men’s health and paternity leave; and they have encouraged local communities to feel empowered in demanding more gender-equitable health services.

This success, however, is not without its challenges. For example:

Working around this resistance can require a few changes in plans – such as pursuing new partners or taking a different approach with messaging. For example, even though non-typical allies like the military or police forces are often associated with dominant masculinities and “machismo,” they were more receptive than expected as partners in Guatemala. Additionally, both emphasising that being an involved father is about full partnership in caregiving and bringing women along in the transformation process have proved to be crucial inroads to overcoming resistance.

Challenges have been felt to different degrees and at different times in MenCare’s Latin American initiatives. Rather than halting work, however, these obstacles have inspired partners to conduct their own research, establish broad networks, rally support, and work with institutions to find allies. To help overcome resistance, partners continue to highlight the benefits that MenCare can bring to families – relieving financial burden and women’s workload – and to show the long-term advantages that gender equality holds for society and for those resistant groups themselves.

Redefining what it means to be a man is no small task in any culture. In Latin America, MenCare is helping the tide to turn – facing obstacles, but moving forward.

To find out more about MenCare in Latin America, read the EMERGE case study and story of change here.

This blog is also available in Spanish.