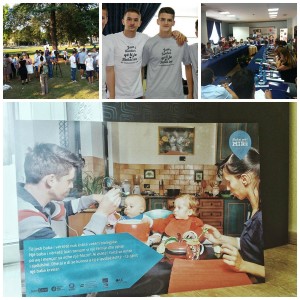 Albania formally launched its first ever MenCare campaign in Tirana on July 16, 2015. Eighty people attended the event, including civil society activists, government representatives, community members, parents, and the media. Featuring a roundtable discussion with speakers from local and international organizations, the United Nations, and the Albanian Ministry of Social Welfare and Youth, the launch event highlighted the importance of fathers’ and male caregivers’ active participation in childcare and household tasks. The launch also unveiled a photography exhibition, featuring Albanian fathers and male role models.

Speakers at the event included by Blendi Klosi (Minister of Social Welfare and Youth), Iris Luarasi (Executive Director of the Counseling Line for Men and Boys), Besnik Leka (Albania/Kosovo Coordinator of CARE International Balkans), and David Saunders (Representative in Albania of UN Women).

The MenCare campaign in Albania is coordinated by CARE International Balkans and the Counseling Line for Men and Boys as part of the “Boys and Men as Allies in Violence Prevention and Gender Transformation in the Western Balkans” project, supported by the Austrian Development Agency.