Gender equality requires a revolution in the lives of men and boys, and achieving this requires urgent policy changes, MenCare-authored report argues

Targeting fathers is the key to achieving gender equality. Fathers matter deeply to child development, and they are as biologically hard-wired to provide care as mothers are. Furthermore, fathers with close connections to their children live longer, have fewer health problems, and are more productive and generally happier: these are among the key findings of the first-ever State of the World’s Fathers (SOWF) report, a landmark analysis of fatherhood that draws evidence from hundreds of studies covering all countries in the world with available data.

Promundo, as a co-coordinator of the MenCare Global Fatherhood Campaign, launched the State of the World’s Fathers report globally on June 16 at the United Nations Headquarters in New York with support from UNFPA, the Clinton Foundation’s No Ceilings: The Full Participation Project, and HeForShe: UN Women Solidarity Movement for Gender Equality. Other international launches, in 10 cities around the world, were held at the US Congress as well as parliaments in Sweden, the United Kingdom, and Brazil, and were highlighted in the media, from the New York Times and the Guardian to FiveThirtyEight and Fast Company, as well as on social media. Additionally, regional and thematic summaries were produced to inspire and lead international and national advocacy around the impact of men’s involved, nonviolent caregiving.

From New York to Nairobi, here are some of the highlights: 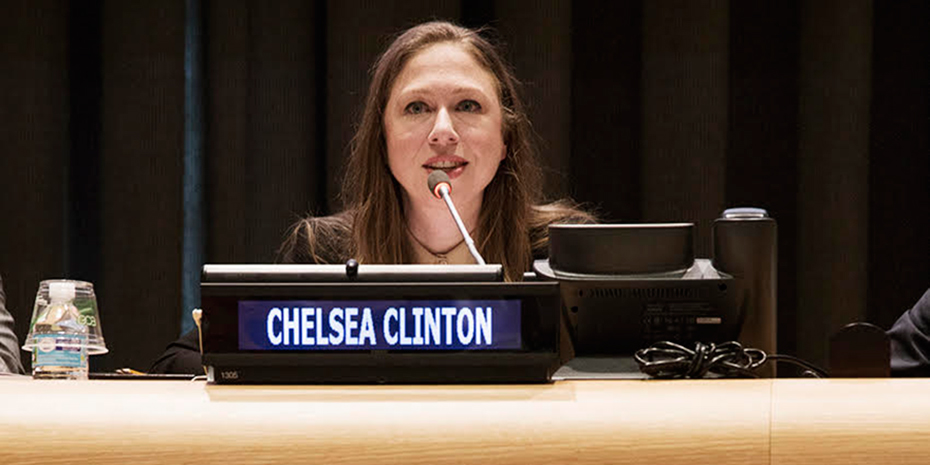 Chelsea Clinton opens the global launch of State of the World’s Fathers at the United Nations. Credit: UNFPA/Ania Gruca

Chelsea Clinton delivered opening remarks at the global unveiling of the inaugural State of the World’s Fathers report at the United Nations, calling for all countries across the globe, including the United States, to ensure paid parental leave for mothers and fathers.

“We know that having more opportunities for fathers to be engaged is not only good for fathers and their children, but good for our economies,” Clinton said. Watch the full event here, including remarks from UNFPA’s Deputy Executive Director Kate Gilmore, the report’s key findings presented by Promundo’s International Director, Gary Barker, essential takeaways from the authors, and more.

The launch of the first-ever State of the World’s Fathers report at the Swedish Parliament took the shape of a panel discussion focusing on key policy asks, with representatives from the Swedish Parliament, SIDA, and non-governmental organization (NGO) representatives. The discussion will be used to inform the development of advocacy strategies around the fatherhood, caregiving, and gender equality agenda in Sweden. 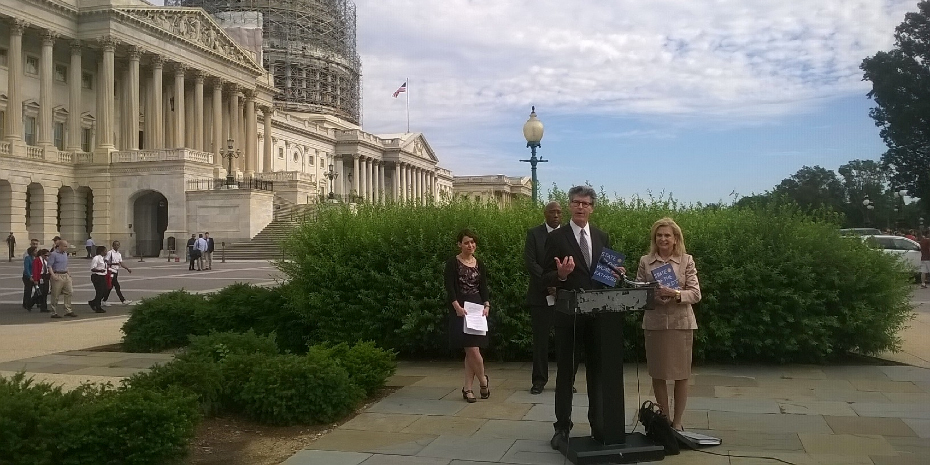 State of the World’s Fathers co-author Michael Kaufman speaks to the press outside of the US Capitol. Credit: Promundo-US

Representatives Carolyn B. Maloney (D-NY), Charles Rangel (D-NY), Ami Bera (D-CA), and Jared Polis (D-CO) joined leaders from Promundo, the Center for Urban Families, and the National Partnership for Women & Families to unveil the State of the World’s Fathers at the United States Congress in Washington, DC.

“Too often we focus on leave and childcare as women’s issues, but these are family issues affecting both fathers and mothers,” Maloney said. 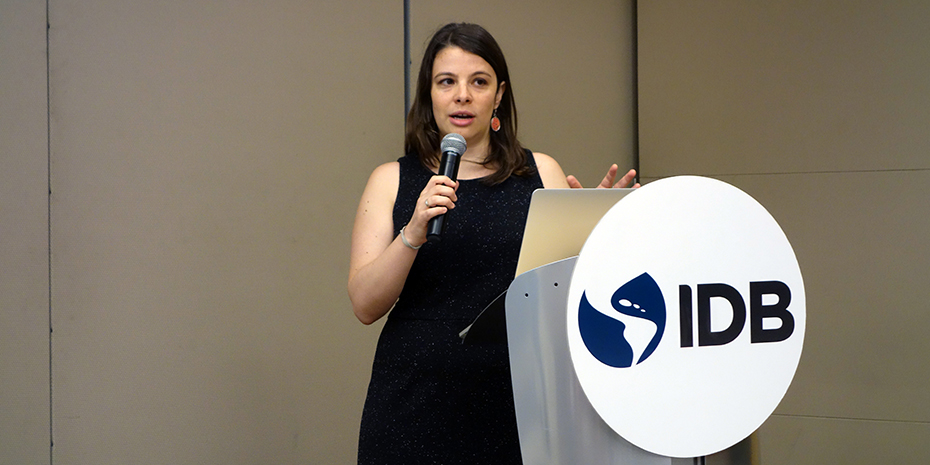 “Gender equality and children’s rights will not be achieved without involving men in caregiving,” report author Ruti Levtov noted. 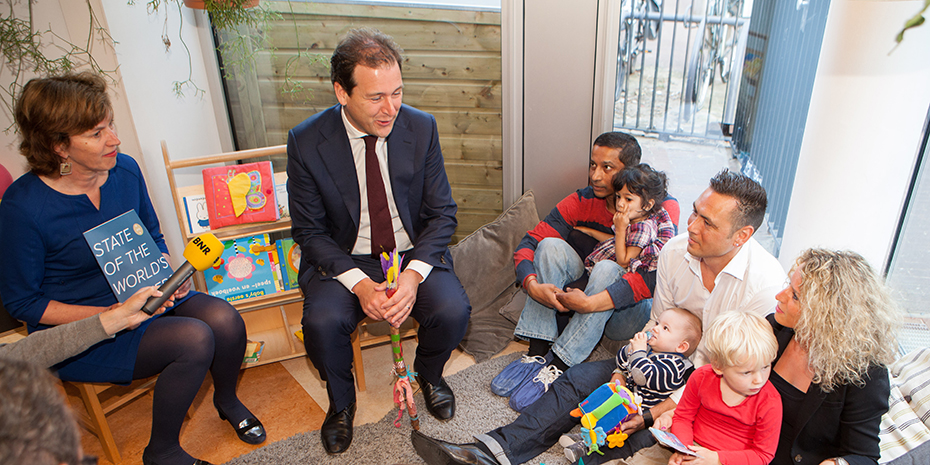 Netherlands Minister of Social Affairs, Lodewijk Asscher, at the Amsterdam launch of State of the World’s Fathers. Credit: Rutgers/E. Lonnee

Netherlands Minister of Social Affairs, Lodewijk Asscher, received the Dutch analysis of State of the World’s Fathers at the Netherlands’ launch of the report. Dianda Veldman, director of Rutgers, asked the minister to be an ambassador for caring fathers and to expand paternity leave in the Netherlands.

“Involved fathers are good for society, children, women, and fathers themselves. I compliment those employers who have already extended paternity leave on their own,” Asscher said. 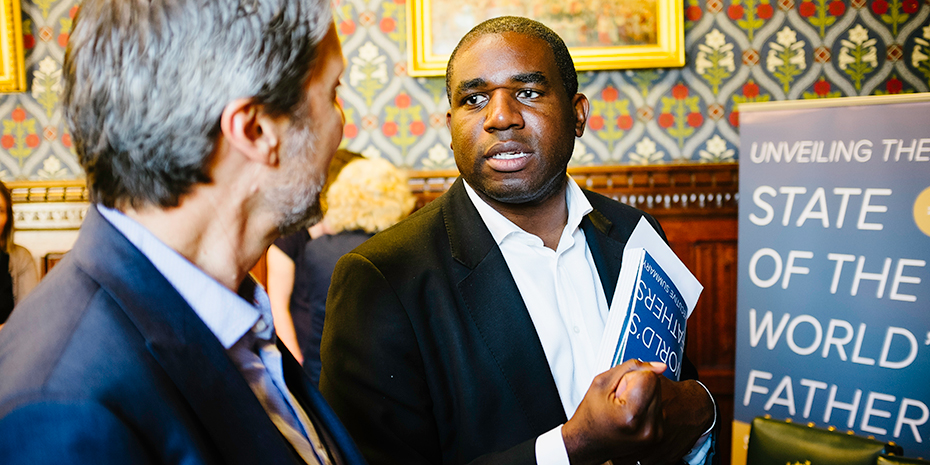 Promundo International Director and State of the World’s Fathers co-author Gary Barker speaks with David Lammy, MP and mayoral candidate, at the London launch of the report. Credit: Ashley Jones

The launch of State of the World’s Fathers at the British Parliament featured a presentation of the report’s key findings and a question and answer session with the audience. The event featured speakers from the All-Party Parliamentary Group on Population, Development and Reproductive Health; Rutgers; Fatherhood Institute; Salamander Trust and Athena Network; and Promundo. 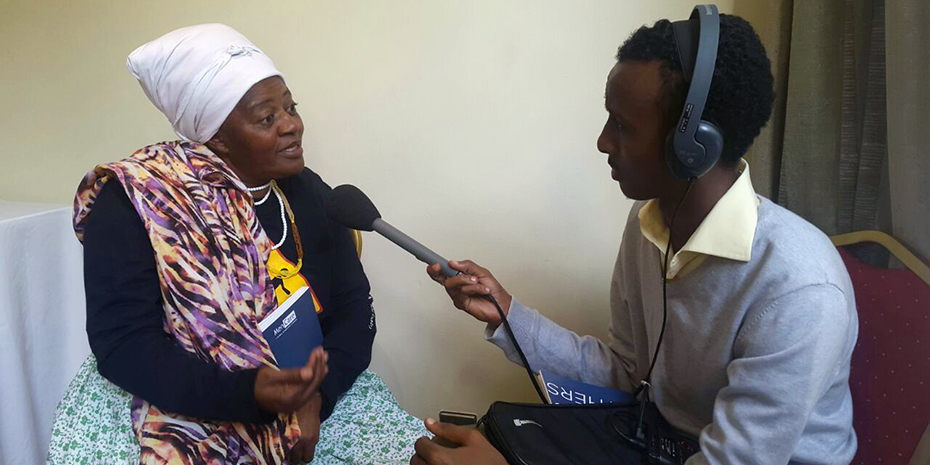 Rosa Namises, Director of Women’s Solidarity Namibia, is interviewed by BBC Africa at the Nairobi launch of the report.

The Nairobi launch of State of the World’s Fathers included a presentation by Save the Children’s Regional Director David Wright, a performance by Kenyan pop artist Nameless, and the personal story of a young father and teenager from Nairobi.

“The first State of the World’s Fathers report reaffirms that fathers matter for children and that caregiving is good for fathers. With it, we want to begin to lay the groundwork to influence future policy and programs in Africa that address the current lack of men’s and boys’ equitable participation in caregiving and that address the rigid ideas about gender and the harm that these issues bring to women, to children, and to men themselves,” Wright said.

The State of the World’s Fathers launch in Geneva was sponsored by the Permanent Missions of Sweden and Uruguay and coordinated by Save the Children; representatives from the Permanent Missions, United Nations agencies, various NGOs, and other activists attended the event. Participants made recommendations regarding the importance of fatherhood and caregiving, as well as the framing of the issues within the broader gender equality agenda. 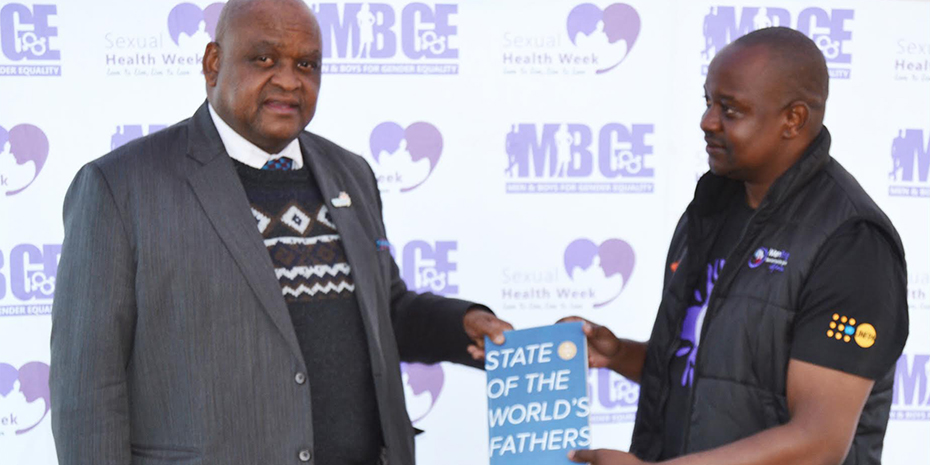 Botswana Assistant Minister from the Office of the President, Phillip Makgalemele, receives a copy of State of the World’s Fathers at the Shoshong launch.

In Botswana, over 350 people attended the launch of the State of the World’s Fathers report, including 60 fathers who had graduated from MenCare programs in the villages of Otse, Mahalapye, and Shoshong. Botswana Assistant Minister from the Office of the President, Phillip Makgalemele, attended the launch and received a copy of the report.

“MMM welcomes the SOWF report as a major step towards the recognition of unpaid family care work traditionally performed by mothers. Gender equality will never be achieved if the care activity is not shared, valued, and recognized as a mothers’ and fathers’ contribution to society,” said Anne-Claire de Liedekerke President of Make Mothers Matter. 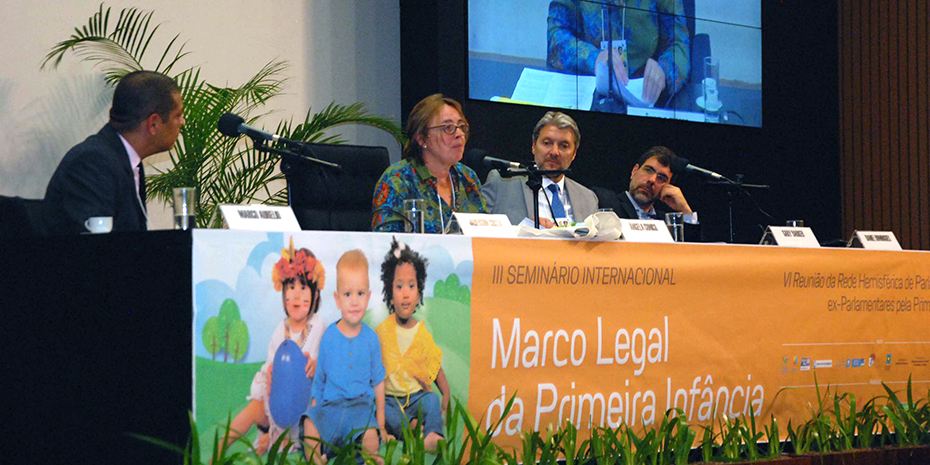 Panelists present at the Brasilia launch of State of the World’s Fathers. Credit: Marçal

Promundo presented the State of the World’s Fathers in Brasilia during a three-day seminar on the “legal framework of early childhood” at the Brazilian Parliament. Promundo’s International Director Gary Barker addressed the positive impacts of paid paternity leave on the lives of children, women, and men, while Instituto Promundo’s Executive Coordinator Marco Aurélio Martins outlined a strategy at the individual, community, and institutional levels to achieve gender equality and involvement of men as caregivers. 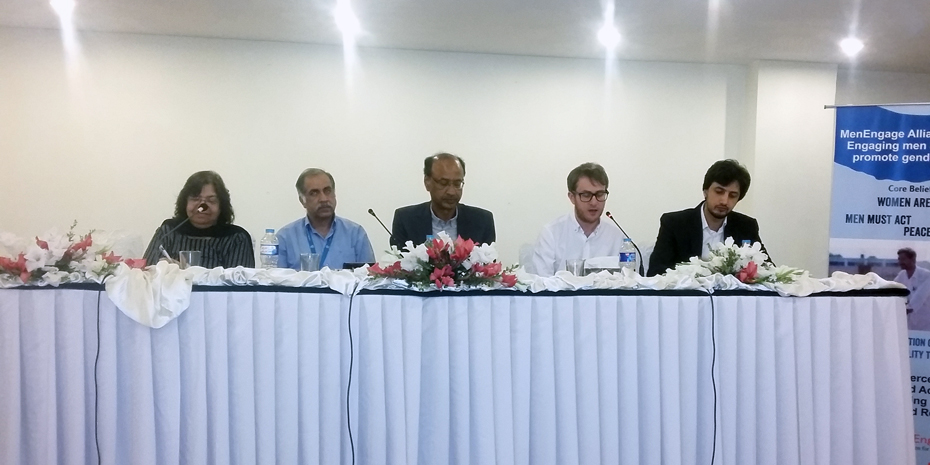 Panelists present their points of view related to fatherhood and caregiving at the launch of State of the World’s Fathers in Islamabad.

The launch of the State of the World’s Fathers report in Islamabad featured a panel of governmental and intergovernmental representatives, politicians, and NGO experts, including speakers from the Human Rights Commission of Tehrik-e-Insaf; the Ministry of Law, Justice, and Human Rights; and the National Commission on the Status of Women. Coordinated by Shirakat – Partnership for Development, as secretariat of the MenEngage Alliance Pakistan, the launch highlighted the importance of involved, equitable, nonviolent fatherhood on child development and women’s empowerment.

“If we want to change fathers of tomorrow, we need to work with the children of today,” said UN Women Country Representative Jamshed Kazi at the launch, emphasizing that fathers play an important role in promoting gender equality.

*This blog was updated on October 6 to reflect additional launches of the report.