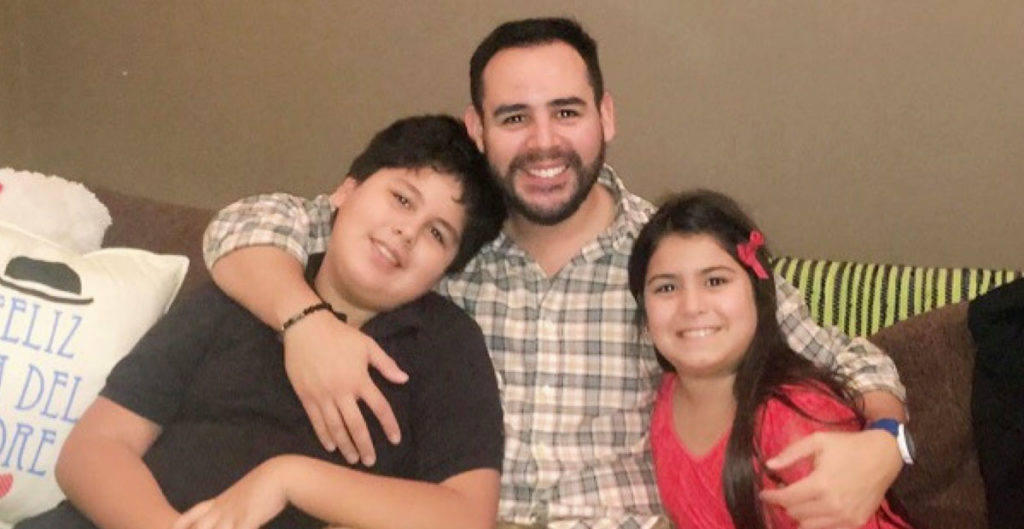 This interview with Ronald Digalo, a father of two, was conducted by Gustavo Benítez of Asociación Igualdad, a MenCare partner in Paraguay.

Asociación Igualdad is a nongovernmental organization founded in 2006. One of its goals, through its Soy Papá (“I’m A Dad”) campaign, started in 2016, is to promote responsible fatherhood, including through advancing men’s caregiving; promoting equal sharing of domestic duties; and preventing violence against children, teenagers, and women.

This interview has been translated and adapted from the original in Spanish.

Ronald: First of all, thank you very much for the opportunity to participate in this interview. I’m Ronald Digalo, I’m 35 years old, and I work as an HR consultant. I have two children, Francesco and Alexia, and I’m very happy to be here today.

Gustavo: Likewise, Ronald, thanks very much. Ronald, how did you feel when you found out that you were going to be a dad?

Gustavo: Were you there when Francesco and Alexia were born?

Ronald: The first time I saw Franceso and held him in my arms, when he was born, it was a unique feeling… I was no longer just young, but rather a young father. At that moment, I became responsible for the life of another human being, and that changed a lot inside me. On the other hand, when Alexia was born, I was able to enjoy the moment more, feeling scared but knowing that I was now the father of two children.

Gustavo: Ronald, did you have any idea what it would be like to be a dad?

Ronald: I had some vague ideas, because of the experiences others had shared with me, and because of what I was taught and what I experienced from a very young age. However, the experience is unique with each child and to each parent.

Gustavo: Ronald, we did some outreach via Facebook, asking the following question: “What do mothers expect of the fathers of their sons and daughters?” Without filtering the responses nor analyzing them through a gender lens, these are the answers we received:

Viviana Ayala: That they be friends with their children, that they set an example through their actions, because before you know it, the children will imitate them. My children need that.

Lucelia Liz: Emotional and economic support, being present over the course of their children’s growth and development, instilling a sense of security and love. Women can give all of that, but a father figure in the life of the children offers something additional.

Vero Ayala and Rosana Roa: Responsible fatherhood, whether or not they are in a relationship with the mother.

Liza Martínez: That those that aren’t part of the same family pay child support and are present in the education and development of their children.

Mary Ayala: For me, responsible motherhood and fatherhood means making a series of conscious decisions about the child’s development, from prenatal care through adulthood, as well as being part of all aspects of the child’s growth as an individual. A responsible father is one who makes an emotional, economic, and physical commitment to his child.

Lupe Romero Rossi: That they back us up when we discipline children or give a command.

Gustavo: Ronald, do you see any of these expectations reflected in your day-to-day life as a
dad?

Ronald: I can see something that translates to my experience as a father in each of these people, yes. The logistics of raising a child is a whole subject in and of itself. A father’s presence in the lives of his children is a very important factor for both boys and girls: being able to accompany them, give them affection and love, and teach them. You must reach an agreement with their mother about certain parameters of upbringing. One of the people mentioned discipline, and it is important that parents agree on how to use [positive] discipline.

Gustavo: Within the framework of these expectations, what are some of the shared care and domestic responsibilities you’ve taken on since becoming a father, with Francesco and Alexia?

Ronald: I take on various tasks and care work as a dad. First of all, not making a distinction between mothers’ work and fathers’ work is fundamental. I can cook, and when Francesco and Alexia were babies, I changed them… When she was young, we discovered that Alexia had a lactose allergy, so I learned to make soy milk, and I was the one who prepared the milk for both children.

Gustavo: How do you think your role as a father will impact your children throughout their lives, from birth, through puberty and adolescence, and finally into adulthood?

Ronald: I think that the memories that are generated in every stage of your life – those pieces of advice and moments of affection, even of contention – are very impactful. From the time that they were very young, I was aware of this when talking to Alexia and Francesco.

Ronald: Shortening the amount of time a father can spend with his newborn child reduces the possibility of strengthening the bond that a father has with a son or daughter. I believe that a father’s connection with his child is as important as a mother’s, and therefore they should have equal access to parental leave.

Gustavo: How do you think this type of leave can contribute to different structures, not only in companies, but also in society as a whole?

Ronald: I think it can impact consciousness, expand awareness that we are responsible for the lives of others. That responsibility brings happiness, and if we extrapolate this to companies and organizations, a happy collaborator produces more.

Gustavo: Do you agree with the statement, “Responsible fatherhood means being committed to not using any type of violence against your children”? How do you live this in your day to day?

Ronald: Yes, I agree. How do I live this out? I believe human beings are the product of our childhoods. I know that if I use any kind of violence against my children, they will carry that with them throughout their lives.

Gustavo: What would you say to the men who are thinking of becoming parents, or who are parents?

Ronald: If you are thinking about becoming a parent, know that it’s a responsibility. If you need time to prepare for that experience, then take that time. Also get ready to live out the experience of parenthood, and to enjoy the experience. If you are already a parent and believe that you need to bond more with your children, start now, because time passes very quickly.

Gustavo: Speaking of passing time, let’s imagine this hypothetical situation: You’re 70 years old, it’s Father’s Day, and Francesco and Alexia have written you a letter. What would you like to hear in that letter?

Gustavo: Thanks, Ronald, for sharing this part of your life. Do you want to add anything else?

Ronald: Yes. I would like to invite fathers to experience parenthood. Get involved in every aspect of physical and emotional care, because that is what children are going to take away forever.

Gustavo: Thank you very much!