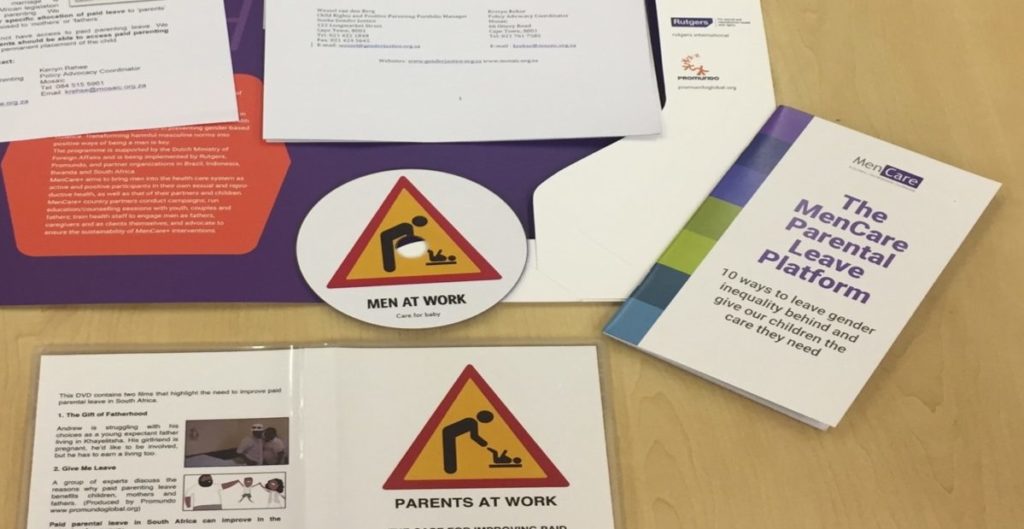 This blog was authored by Cody Ragonese from Promundo-US and reflects comments made by Wessel van den Berg from Sonke Gender Justice (South Africa) during the MenCare webinar “Innovations in Policy Advocacy to Advance Men’s Caregiving” on June 12, 2018. View the full recording here, with additional presentations by Suna Hanöz-Penney from AÇEV (Turkey) and Ilze Smit from Rutgers (Netherlands).

South Africa eagerly awaits the signing of its new Labour Law Amendment Bill, which will provide an increase in paid leave benefits for all new parents. The bill was passed by the country’s National Assembly in 2017; it is expected to be approved by the National Council of Provinces and signed by President Cyril Ramaphosa this year.

Before this amendment, the law provided four months of maternity leave for new mothers, paid on a sliding scale of up to 54% of the mother’s salary. The law provided no leave for fathers or any other parents, leaving many to take their allotted three days of “family responsibility” leave after the birth or adoption of a child.

The new amendment is far more comprehensive. It increases maternity leave benefits to 66% of a woman’s salary, and it provides ten days of parental leave for those who do not qualify for maternity leave. The amendment also offers ten weeks of parental leave to adoptive parents and parents who commission surrogacy. It is important to note that the amendment’s language is gender neutral – allowing for all gender identities and sexual orientations.

MenCare partner and global co-coordinator, Sonke Gender Justice, together with its partners in South Africa, led advocacy efforts that resulted in this monumental victory for gender equality and shared caregiving. Here is how they did it:

As the foundation of its advocacy campaign, Sonke partnered with a network of local women’s rights organizations. “Our main case was that fathers’ time for caregiving is a benefit for mothers and children, as well as for fathers,” Wessel said. With the help of organizations like Mosaic, another MenCare partner, Sonke was able to achieve its goal of increasing paid leave for all parents in South Africa.

In 2014, Sonke began to capitalize on media – including radio, newspapers, and television – as an advocacy tool. Staff wrote opinion pieces in newspapers around the country and started to generate public interest around the topic.

Wessel stressed how important it is to get ahead of the story, rather than being reactive. “By being proactive, we are able to propose and generate the narratives we want to see out there,” he said. Sonke also provided scripts to news stations for them to use as guides when they produced segments on fatherhood or parental leave. This helped educate broadcasters and writers on how to frame and talk constructively about such issues in the media.

Another successful strategy was to amplify the voices of those South Africans who were already advocating for paternity leave. In 2014, Sonke collaborated with Hendri Terblanche, a father who petitioned parliament for ten days of paternity leave after his twin children were born three months prematurely. Hendri experienced firsthand how only having three days family responsibility leave (and no paternity leave) severely restricts fathers from forming a bond with their newborns and from supporting their partners at this critical moment. His twins Danté and Juandré were hospitalized for 139 days and 79 days respectively.

In 2016, Sonke and Mosaic had the opportunity to propose a draft bill before parliament. They prepared a submission pack for the parliamentarians using the MenCare Parental Leave Platform, including a DVD, factsheets, and the formal proposal. During the hearing, mothers and fathers spoke about the benefits an extended parental leave provided them and their families. This hearing was overwhelmingly successful, and the parliament moved forward with the proposal.

As Sonke prepares for this year’s passage and signing of the new Labour Law Amendment Bill, it has also launched the State of South Africa’s Fathers report, acting as further evidence of the need for equitable parental leave policies and as a benchmark for the future of South African fatherhood.