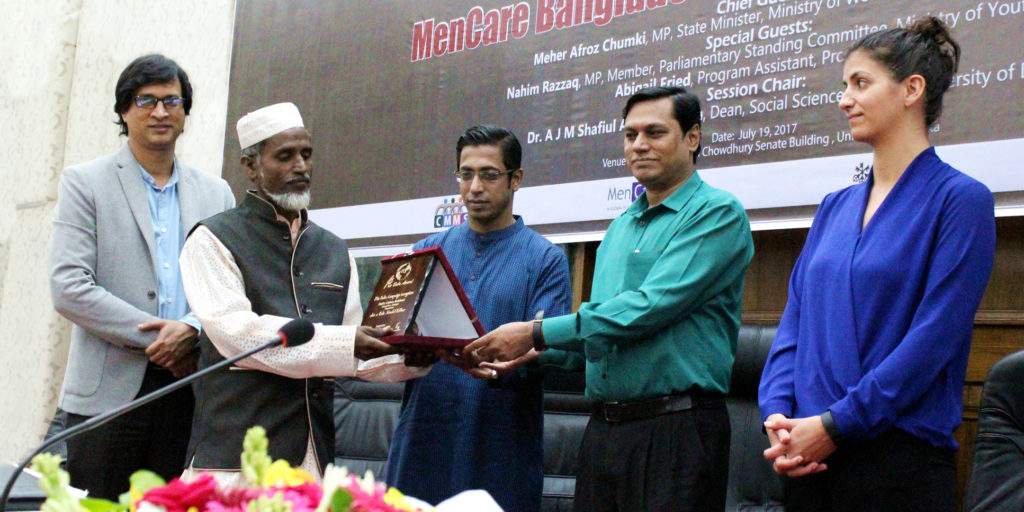 With the motto, “Prio Baba: Responsible Father, Happy Family, Prosperous Country,” the Prio Baba (“Dear Father”) campaign in Bangladesh has successfully completed a 21-month research initiative carried out by MenCare partner Center for Men and Masculinities Studies (CMMS). The initiative was implemented by CMMS and funded by the UBS Optimus Fund, with technical support from Promundo.

The initiative aimed to identify the most effective ways to involve fathers in preventing discrimination against women and girls in the household and beyond. In line with these objectives, the Prio Baba campaign conducted awareness-raising campaigns in rural areas of five districts of Bangladesh. The campaign primarily worked to sensitize fathers about family planning, the rights of women and children, and the negative impacts of domestic violence; it also worked to develop and test community dialogue and role model initiatives engaging fathers to stop violence in their homes.

The initiative culminated in a seminar held on July 19, 2017. The event was held at the Plenary Hall of Senate Bhaban of the University of Dhaka, with significant attendance by academics, nongovernmental organization officials, and students of all ages.

At the event, Dr. Sayed Saikh Imtiaz, lead project researcher and chair of CMMS, shared findings from the participants’ families on fatherhood; violence against women and children; and men’s involvement in maternal, newborn, child health and in household chores. These findings have informed the contextual adaptation of MenCare’s Program P manual, which has been used with couples and healthcare providers in Bangladesh to provide concrete strategies for engaging men in active fatherhood. AJM Shafiul Alam Bhuiyan, dean of the Social Science Faculty at University of Dhaka, chaired the event. Sharmin Islam, executive director of CMMS, and Naheem Razzak, member of parliament, also spoke.

Eight fathers received awards at the event for their exemplary support for the empowerment of women and children in their lives. They have served as role models who reject harmful traditional practices of fatherhood and sensitize people about the rights of women and children. The fathers recognized at the event were Hafez Md Golam Rabbani, Habibur Rahman, Dilip Chandra Das, and Md Delwar Hossain from Rangpur; Md Selim Uddin and Md Nasir from Cox’s Bazaar; and Baser Molla and Md Nurul Islam from Pabna. Nahim Razzaq, member of the Parliamentary Standing Committee on Ministry of Youth and Sports, and Abigail Fried, program assistant at Promundo-US, presented the awards to the fathers.