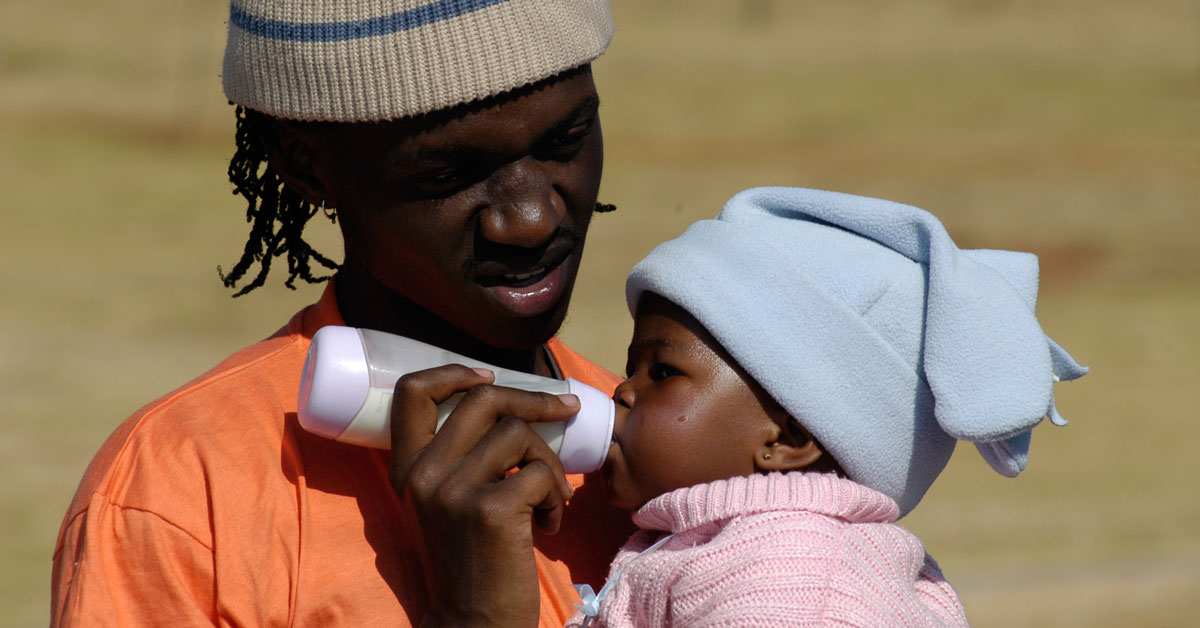 Absent fatherhood in South Africa has been on the rise since 1996, when only about half (49%) of fathers were reported to be present in the lives of their children. Today, the country has the second highest rate of absent fatherhood on the African continent after Namibia. According to new data released by Statistics South Africa, only 37% of fathers in South Africa were present in the lives of their children in 2015.

As a result of this high rate of absent fatherhood, women are bearing the burden of raising children, and children are growing up without the positive influence of a second caregiver. This is one of the reasons why MenCare partner and global co-coordinator Sonke Gender Justice is working to get fathers in South Africa more involved.

Why are so many fathers absent?

The causes of this absence have been largely linked to historical factors of apartheid and migrant labor, which led to the separation of many men from their families. However, cultural norms, HIV and AIDS, high divorce rates, statutory removal of children because of child abuse and neglect, and child abandonment have also contributed to high rates of absent fatherhood. Additionally, in certain cases fathers believe that supporting their children financially is sufficient, without realizing the importance of being involved in caring for their children in other ways.

Why do children need present fathers?

It is important to note that all children can benefit from having multiple, loving parents or caregivers in their lives – whether they be mothers, fathers, or others. Fathers’ presence in their children’s lives is important for many reasons, and fathers can be involved in a variety of ways.

Being present does not only mean physical co-residence or financial support; it also entails fathers’ emotional involvement – giving love, affection, and support. Even if they do not live in the same household, fathers can play a meaningful role in their children’s lives by providing emotional connection and by being involved in their children’s care in nonfinancial ways.

Fathers’ positive presence contributes to children’s cognitive development, intellectual functioning, and school achievement. Children growing up with fathers who are positively involved are less likely to experience depression, fear, and self-doubt. When fathers are positively involved, boys are less likely to search for alternative sources of masculine identification and validation like gangs, and girls are more likely to develop higher self-esteem and less likely to experience unwanted sex. When fathers play an active role in caregiving, it also improves women’s health – especially maternal health – and promotes women’s economic equality.

Bringing fathers and children together

The MenCare+ program was developed from the tenets of the MenCare campaign in 2013. MenCare+ group trainings in South Africa encourage participants to be actively involved in raising their children, supporting their partners, and sharing the work at home. The trainings provide a platform for men to share their experiences related to caregiving, fatherhood, gender roles, sexual and reproductive health, family planning, and nonviolent parenting.

Findings from the 2016 MenCare+ South Africa Outcome Measurement Report recorded distinct attitude changes among men involved in the program. Some of the fathers who participated were initially absent from their children’s lives, while others were abusive or ashamed of their role as fathers. However, in interviews conducted after the trainings, men emphasized the importance of being responsible, supportive parents and partners, as well as positive role models for other boys and men in the community. The program evaluation recorded positive changes in attitudes about men’s condom use, attendance at prenatal care visits, and presence in the delivery room. Participants also noted that a man can be an involved father even if he is not in a relationship with the child’s mother.

Creating change in families and communities

MenCare+ participants attest that the program is creating positive change for individuals, families, and communities. Shane, Dieu-Merci, and Brandon are three participants who redefined their roles in the lives of their children and partners.

Shane, a new father from Manenberg in Cape Town who participated in MenCare+, is proud to have witnessed the birth of his son. He says:

‘‘I was there when he was born, I saw him come out. I even cut his cord. I had a big smile on my face when he came out; it was a nice experience. It is nice to be a father, especially when he begins to laugh. It makes my day.”

Despite being unemployed, Shane remains hopeful about the future; he is determined to get a job and look after his son.

Dieu-Merci was raised to believe that he should be the “man of the house”; before participating in the MenCare+ program, he used to beat his wife and children. However, through his participation in MenCare+, he learned that violence is never acceptable. He says:

“I wanted to change to be a role model for my kids. You must break the cycle of violence because your child will learn from you. My children will learn from me, so I should lead by example.”

Despite his rough past and being absent when his first two children were born, Brandon decided to make a change after participating in MenCare+. He attended the birth of his third child and has never looked back. Brandon now cooks, washes, and cleans the house. He has been a more supportive partner and has developed a closer bond with his children. He says:

“I had to do my part as well, and that created a space where I could spend more time with my kids. Now, if I go out of the door, my kids want to come with me because the bond is there.”

Other participants in MenCare+ are also becoming role models in their communities and encouraging their peers to be active fathers. Read more stories of change from MenCare+ programs throughout South Africa by visiting Sonke Gender Justice’s website.