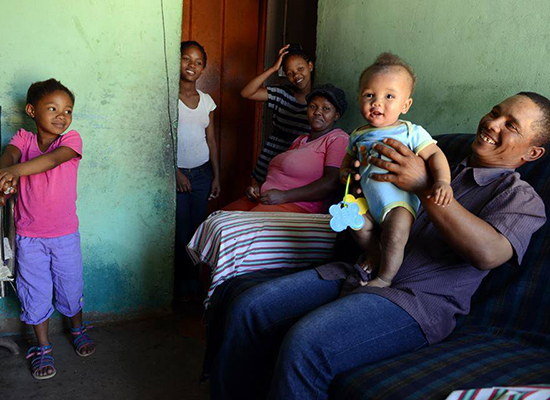 This month, Hendri Terblanche gave birth to an important petition, just eight months after his twin children were born prematurely. His petition, which seeks to provide new fathers with 10 days paternity leave, was submitted to the National Council of Provinces (NCOP) and officially received and acknowledged by NCOP Chair, Thandi Modise, two weeks ago.

Terblanche initiated the #10dayspaternityleave campaign when his twin children were born three months prematurely, and he saw for himself how only having three days family responsibility leave (and no paternity leave) severely restricts fathers from spending time with their children in their first days of life, from forming a bond with their newborns, from supporting their partners and assisting with childcare duties, and from being able to be there for their families at this important moment in all of their lives. This lack of paternity leave is even more challenging in cases where there are medical complications, premature births, and also Caesarean births, which are very common in South Africa as the mother and child are often in the hospital for up to a week, and sometimes longer. Terblanche’s twins Danté & Juandré were hospitalised for 139 days and 79 days respectively.

“During my visits to the ICU, I noted that after the fourth day, other fathers couldn’t come anymore. That was a result of their only having three days family responsibility leave,” says Terblanche.

Kevin Jacobs from Manenberg who is expecting his third child says, “I feel that the three days allocated to us isn’t enough time to assist our spouses or for us to even bond with our kids at that tender age … It’s so unfair that our spouses have to sit with the babies [alone] after that long procedure of carrying them for nine months and then still the painful ordeal of labour.”

Terblanche was fortunate to have a sympathetic employer that granted him flexible work time to care for his children, but he realized that most fathers in South Africa do not have this opportunity and decided to champion this cause on behalf of all fathers, and more importantly, all children.

“Being a financial manager, you’re always trying to identify reasons for problems, and then try to rectify the situation,” says Terblanche, “For me it was such an honour and a privilege to be the father of little Danté & Juandré. I wanted other fathers to also get to be involved in the day-to-day care of their little babies from day one.”

So Terblanche developed a petition calling for an amendment to the Basic Conditions of Employment Act (1997) to include 10 days paternity leave for fathers in South Africa with the birth or adoption of their child(ren). Somehow finding time between his job as a financial manager, and his role as a father to infant twins, Terblanche singlehandedly approached every member of Parliament and urged them to draft a bill for consideration by the National Assembly, mounted a twitter campaign under @DadToBeAdvice using the hashtag: #10DaysPaternityLeave, and submitted the petition to the NCOP.

Sonke Gender Justice (“Sonke”) and Terblanche are now working together to ensure that the special petition to the NCOP for paternity leave in South Africa is taken seriously, and that Parliament also takes up the call to change the law to ensure that a child’s right to parental care is fully realized by the Basic Conditions of Employment Act. The Department of Labour and the Department of Social Development are mandated in the White Paper on Families in South Africa (2013) to explore the feasibility of paternity leave.

“While we hold men accountable to their parenting responsibilities through shared work at home, or child support when they are separated from the mothers of their children, we feel that it is also important for men, women, children and families to create more opportunities for men to be involved in care work,” says Andre Lewaks, Sonke’s Manager of MenCare in South Africa. “Paternity leave is one step towards this that is still lacking in our leave framework.” South Africa’s Basic Conditions of Employment Act (Section 27:1997) only provides for three days of family responsibility leave for employees, and the Unemployment Insurance Act (1966) protects mothers from losing their salary for up to four months at the time their child’s birth. Terblanche’s petition proposes an additional 10 days paternity leave for fathers.

Sonke’s MenCare campaign advocates for men’s involvement in unpaid care work and promotes gender equitable and non-violent fatherhood. Parental leave for fathers creates a valuable opportunity for fathers to do unpaid care work and to bond with their children. Child development research is clear on the fact that a child bonds with the adults that provide for their basic survival needs, in other words, the adults that care for them.

When men get more involved in child-care work, children benefit by receiving more care, and mothers benefit by carrying less of the burden of care and having more opportunities for paid work. More than half of the children growing up in South Africa do so without a father present in the home. In 2011, 48% of South African children had fathers who were living elsewhere than in their home, 16% had fathers who were deceased, resulting in a massive 64% of children growing up without their father in the home.[1] In many of these cases, it means that other members of the family – mostly mothers or older siblings – are relied upon for all the care work.

Research evidence from countries that offer paternity leave supports the intuitive idea that an emotional connection during infanthood would lead to long-term involvement in care, and that fathers would then take more responsibility for their children’s development.

While a mere 10 days of paternal leave does not give fathers the opportunity to be as deeply involved in the care work of their children as it does mothers, Sonke Gender Justice supports this petition as a step in the right direction towards a framework where the vital care work in an infant’s life could be shared equally by both primary caregivers.